The New England Patriots have the worst defense in the league when it comes to yards conceded, leading some to quickly conclude that they have a terrible defense. They don’t. As it is often noted, the numbers on the scoreboard, not the stat sheet, are what matter on the journey to the Superbowl. Multiple MVP and Superbowl-winner Tom Brady knows how to win, and his command of the entire team’s concentration and execution has proved that a record 118 times in his career with Coach Belichik. 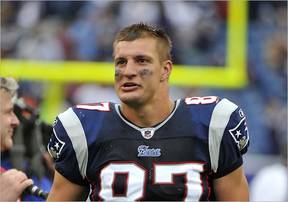 The superman of Monday night’s blowout of the Kansas City Chiefs was tight-end Rob Gronkowski, who caught two touchdown passes from Brady, one a muscular 52-yard dash. Gronkowski has become perhaps the best tight-end in the league, and is definitely now the favorite end-zone target of his captain. The team with the “worst defense in the league” now has a two-game lead in the AFC East.

The Buffalo Bills don’t seem to know what’s happening to them. Three weeks ago they held a 5-2 record and a good look at the playoffs. They’ve slipped to a .500 record of 5-5 since then, and Sunday’s 35-8 thumping at the hands of Miami has left them shaking their heads. The Dolphins, on the other hand, have won three on the trot after starting the season 0-7, and whatever mysterious force has initiated their turnaround is more than welcome at Sun Life Stadium. Reggie Bush seems to have taken to the Florida climate, racking up a solid return of touchdowns after his departure from New Orleans.

The Oakland Raiders have a lot of people talking. After losing their explosive running back Darren McFadden to injury, many assumed that the Raiders’ chances of progressing through to the postseason were highly diminished. The old-hand Carson Palmer joined the Raiders as quarterback just a month ago from the Bengals, and has turned the Oakland campaign around. He has rapidly adjusted to the new system and looks at home behind his steely offensive line. The AFC West is hardly the most difficult division to win, but the Raiders are atop with a 6-4 record. Hot on their heels, however, are the Denver Broncos.

Known now to some sensationalists as the ‘Denver Tebows,’ the Broncos have won three games in a row to move to 5-5. Tim Tebow is not a traditional quarterback, but in the past weeks he has achieved the desired result – wins. Benched quarterback Kyle Orton is probably sitting in a corner somewhere, ruing his poor start to the season, and perhaps even bitter about the media’s romanticizing of young darling Tebow.

The Houston Texans had a bye week, and they needed it. Having just lost quarterback Matt Schaub to a long-term foot injury, time needs to be spent on the training ground for incoming QB Matt Leinart to adjust to the regimes. Houston is typically a running team, so perhaps the hitch won’t be too extreme, but for the AFC South leaders the next couple of weeks will be telling. Pro-bowler Andre Johnson is likely to be back this upcoming weekend; it will be a stern test for the former Heisman-winner Leinart.

The Cowboys overcame the Redskins in an overtime thriller that featured a last-gasp touchdown by Washington with just seconds left to send the game to extra periods. The Redskins won the toss and moved upfield but couldn’t convert a 52-yard field goal, leaving the door open for Mr. November Tony Romo, who dutifully led Dallas to the red zone where rookie kicker Dan Bailey could comfortably convert for the win.

The Packers moved to 10-0 and the 49ers continued quietly to reach 9-1. The AFC lacks any team with less than three losses, which seems strange, with three teams sharing the 7-3 best billing. Moving forward, it really is becoming a curious race to the finish, with many divisions still very much up for grabs.

For the first time in a while, Thanksgiving Thursday will provide games of significance.

Within the three games scheduled, each of the six teams recorded wins this past weekend. The seemingly unstoppable Aaron Rodgers and the Green Bay Packers take on the fickle Detroit Lions. The Packers just snuck by the Buccaneers this past Sunday, exposing weaknesses in their coverage, and on only three days rest this defense could fall victim to their fatigued bodies. The Lions looked toothless in the early stages of their contest with Carolina, but turned on the pressure in the latter stages to put up huge numbers and walk away with a 49-35 victory. Rest assured – this will be a battle of offenses. Detroit needs a win more than the Packers, so look forward to Calvin Johnson taking on the Packers’ back-fielders with ferocity.

The Ravens were without figurehead Ray Lewis this weekend, but they still showed that their defensive power is part of the league’s upper tier. They host the one-loss 49ers, and this could be their biggest examination of the year. Alex Smith is on fire, and if anyone can get past the Ravens’ rip-roaring line, it might be him. Expect a lot of hard hits, but also anticipate some big-time plays.

What would Thanksgiving be without the Dallas Cowboys? Well, it would be a lot of other things, but the matchup between Romo and the Miami Dolphins has some extra spice this year. The Dolphins are coming in to the week with roaring momentum, something that would have been impossible to say in the early stages of the season. The Cowboys and their faithful followers hate to lose at home more than anyone, and Jerry Jones won’t take kindly to a victorious invader this year. Jason Witten will likely be the force he has been all season against a struggling Dolphins defense. It’s up to the Dolphins to ignore the fanfare and do what they’ve been doing – score a lot of points.

Dare I predict? Green Bay by 14, San Francisco by 6 and Dallas by 7. Hardly courageous, but there you have it.

Sit back and enjoy.