Finally, the Tim Tebow bandwagon hit a bump in the road and a wheel came off. Far be it from me to contradict a nation of fair-weather fanatics, but sadly Timothy isn’t the Messiah that some people would like to believe. It would certainly be a romantic story to celebrate the boy who they all said couldn’t make it, who beat all the bad guys and hoisted his team to glory. But curb that idea for a second – this should be a wakeup call. Of course, Tebow is a great athlete and a talented quarterback, but is he some type of second coming? Calm down, America. This nation is too quick to jump on something that seems either glorious or devastating without ever really rationalizing it. The Tebow-Mania concept is so unbalanced, ‘bringing together’ people who have no clue about the sport or the man, but became hands-around-the-world because he projects a religious affinity. His religion/faith/belief/voodoo has absolutely nothing to do with his athletic skills, and people should realize that. He smiles through inane questions from reporters and obviously doesn’t want the adoration, pressure or stigma that would come from a cultish following, so just let him be. This is a good man, and he’s just a human like the rest of us. Allow him to accomplish what he’s worked all his life for – prowess, not adulation. 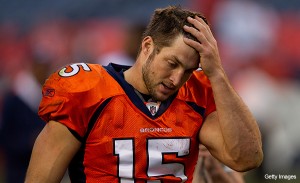 The Denver Broncos lost to the New England Patriots. The Patriots have at times suffered from their defensive unreliability, and almost did so again on Sunday. Luckily, they have an indisputably great quarterback taking the snaps, and proved that though it might be ugly, they can still scrape together a victory. Tom Brady has enough gold on his fingers to make his supermodel-wife Gisele blush, and ultimately we have to believe that winners are those who have won at the top level, and will continue to do so.

The Green Bay Packers and the Indianapolis Colts both bucked trends on their Sunday afternoons. The Packers were 13-0 up to this point, but fell to the Kansas City Chiefs, who hardly have much to hang their hats on this season. Aaron Rodgers, this season’s likely MVP, was not overly discouraged by the dent in their season statistic. The last team who went 16-0 in the regular season was the Patriots, and even after winning the first 18 on their way to the Superbowl, they lost to the New York Giants in the only game that really counts. Rodgers is without stalwart receiver Greg Jennings, who was carted off the field last week with a knee injury, but is scheduled to return in two weeks – hopefully a key injury isn’t the reason that this fantastic team doesn’t go all the way. 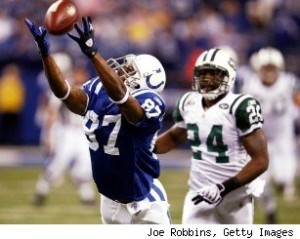 The Colts won their first game of the season, defeating division competitors Tennessee. It’s difficult to shade the embarrassment the Titans must be feeling at dropping a game to the worst team in the NFL, but at least Indy is now able to avoid the tarnishing shame of a winless season. The Colts must tread lightly, however, if they are to maintain the worst record in the league and therefore the first pick in next year’s draft, as both the St. Louis Rams and the Minnesota Vikings have just two wins apiece, and look highly unlikely to add to that.

The Houston Texans also chalked up a loss, a week after being crowned the AFC South champions. The Toros and quarterback TJ Yates shouldn’t be too discouraged by the road loss to a Cincinnati team who at times look toothy enough to contend with the big boys. Assuming that Houston can mentally gather themselves in the remaining two weeks of the regular season, they are still in good stead for a solid playoff run.

The Dallas Cowboys came out on Saturday night with vigor. Be it by embarrassment of recent poor losses or perhaps something just clicking between the locker-room and the playing field, they looked hungry. They burst to a 28-0 lead and retained that until half-time, but the devil of insecurity struck them again at the restart, whereby at the end of the game they had given up fifteen points and only added three in the second two quarters. Opponents Tampa Bay looked as though after their first half thrashing they had kicked themselves in the backside and decided to make a game of it, and the Cowboys unfortunately seemed as though they became too comfortable and rested upon some unreliable laurels. With two huge weeks remaining, it’s yet to be seen if the Dallas outfit can really dominate a good team and stick to a lead.

By the way, Drew Brees is going to set a single-season passing record, surpassing none other than Dan Marino’s 1984 total of 5084 yards. So why aren’t enough people talking about him as a true elite quarterback over unproven golden boy Tim Tebow? Because we like sensationalism. Don’t linger on this legacy for too long; there are bigger and better stories. Show us your rings, Aaron, Tom and Drew. Thanks for the reminder.