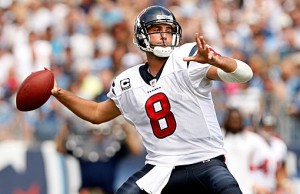 Yes, question from the back. “Do you prefer Tony Schaub or Matt Romo?” The Houston Texans quarterback did his best Cowboy impression as he sheepishly tossed an interception with time expiring to thankful safety Michael Huff to culminate a game lacking any real offense. The Texans had a chance to become the late winners, a rarity for them, but seemed to panic and ended up losing at home to a Raiders team that shouldn’t have been too much of a problem. The story of the day, however, was the death of long-time Raiders owner and NFL legend Al Davis, whose signature slogan “Just Win Baby!” seemed to have an eerie presence in the visiting crowd. The game was messy; the only player who could be proud of his performance was Raiders kicker Janikowski, who bombed field goals in all day, three of which were from over 50 yards. Spiritual victory or not, Oakland knocked Houston down to 3-2 on the season. Tennessee also lost, leaving the two teams tied for the lead in the AFC South.

The San Francisco 49ers are quietly in possession of one of the league’s best records. They put down the Tampa Bay Buccaneers in a sunny Sunday showdown to move to 4-1. The Bucs are no walk-over crew, and it seems like Alex Smith has chemistry with his receivers worthy of consideration. Frank Gore seems revived, they’re passing the ball, and their defense has certainly improved.

Dallas was probably grateful for their bye week, presumably using the time off to head to the video rooms and trying to figure out their next step forward. The shortened pre-season and training camps are having a visible effect on a number of teams, all of whom are hoping that as the season progresses they will  improve their chemistry and records. Some squads seem to have already given up hope of playoff spots after beginning the season with high expectations. The poster team for this has to be the Philadelphia Eagles, who fell to a grimacing 1-4 record. Many analysts had the ‘Dream Team’ moving all the way to the Superbowl – this dream looks to be done and dusted. 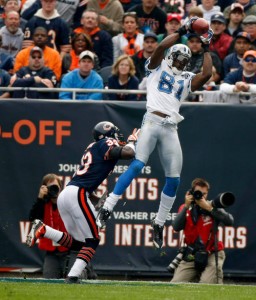 The story of the week is the continuing dominance of the Detroit Lions. They faced the Chicago Bears on Monday Night Football and, largely thanks to a ferocious looking pass-rush defense, claimed their victory and moved to 5-0 on the season, joining the Green Bay Packers as the only teams with perfect records. This is the first time they’ve done this well so early in the season for nearly 60 years. Running-back Jahvid Best came out of nowhere to dash for 163 yards and a touchdown, by far one of the best performances of the day. Calvin Johnson is breaking records and taking names over and over, catching his ninth touchdown of the season, an NFL record through the first five games.  ‘Megatron’ is one of the league’s truly elite receivers, and could claim to be number one without much rebuttal from peers or critics.

Ben Roethlisberger and his Steelers certainly looked to have figured things out, as the quarterback threw five touchdown passes, tying a team record, all with a boot on his injured foot. They beat a good Tennessee Titans team by a solid margin of 38-17, and look a lot better now than they did early in the season. The NFL is all about momentum; these guys have some. The Minnesota Vikings picked up their first victory of the season, riding on the shoulders of star running-back Adrian Peterson, who powered his way into the endzone three times in the first half. The Arizona Cardinals, who gave up 28 points to the Vikings in the first quarter alone, are beginning to sweat more and more each week. Considering the money they spent on Kevin Kolb, you’d think the quarterback would be putting up much more considerable numbers. Kolb threw for 232 yards, no touchdowns, and two interceptions – hardly a franchise performance. 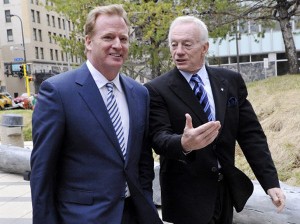 Money has been the premise of sports this year, the NFL situated glaringly at the helm. With the agreement of some huge contracts for certain players, we would be forgiven for expecting great things. This season has been full of surprises however, proving that you can’t just buy your way onto the Champions stage. Just ask the Miami Heat or the New York Yankees.