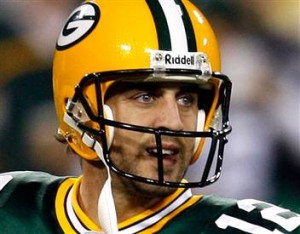 Detroit fell into the order of ‘good teams with unlucky losses,’ albeit with sharpened teeth. Scott Linehan’s offensive plans  – aglow with glistening, undefeated canines – came up short at Ford Field. The roaring Lions, however, still have plenty to look forward to. The predators didn’t get the numbers they needed from stalwart Calvin Johnson, indicatively, but are they a one-man show? Their pass-rush is second-to-none, but if tentative quarterback Matt Stafford can’t find his talisman, the comedy could easily become a tragedy.

Aaron Rodgers is operating as an Adonis. The Packers are now the only team with a perfect record, and the man they once called ‘Favre’s little brother’ is writing his own legacy. It’s difficult to see any team removing this team from title consideration, and if Rodgers continues to dance around with the absolute confidence he currently operates with, ‘The Repeat’ is assured. Help from machinists like Jordy Nelson and Clay Matthews could put this team into the discussion of great NFL teams. 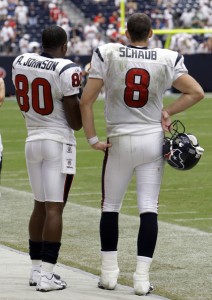 The Houston Texans and the Dallas Cowboys both whimpered their way towards losses this weekend. Neither team seems to be able to hold on to a lead or momentum, and resultantly they removed themselves from realistic post-conference discussion. The Texans might limp past the Titans, who had a bye this week, but moving with crutches this early in the season doesn’t bode well for the future. Houston is missing Pro-Bowlers Andre Johnson and Mario Williams to long-term injuries, and it shows. Tony Romo played with a slightly revived squad but something still doesn’t feel right at Cowboys Stadium. Even the excellent receiver Miles Austin can’t patch a leak that seems to be running quite deep.

The Tampa Bay Buccaneers invited the New Orleans Saints for a debate and came out with satisfied grins. Drew Brees threw an uncharacteristic three interceptions in a 26-20 Saints’ loss, and looked despondent afterwards. The Superbowl winner isn’t used to losing, and the short ride back from Florida must have left him with a bitter taste in his mouth. The rivals now have the exact same record: another example of this season’s surprising numbers.

“You can see the depression on the Dolphins sideline.” Ex-coach and Monday Night Football analyst Jon Gruden knows as well as anyone the sight of a team without a prayer. Miami faltered to 0-5, joining the Colts as the two teams without any wins this season. The Dolphins lost their quarterback Chad Henne this week to season-ending shoulder surgery, adding to the bleak future of a once-great team. Instead of seeing his teammates on the field, Henne will be surrounded by graduates of surgical tech schools. Pretty much the only article they have left to look forward to is obtaining next season’s number one draft pick, which will most likely be promising quarterback Andrew Luck from Stanford, and re-building from there. Head coach Tony Sparano is said to be treading on thin ice, but he can hardly be fully culpable for the team’s dreadful output this year.

The Washington Redskins, in charge of the most perplexing running game in the league, handed the Philadelphia Eagles their second win of the campaign, a much-needed boost for the so-called Dream Team. Vince Young came in for one snap when starting quarterback Michael Vick left the field with dirt in his eyes, and proceeded to throw an interception. Not exactly a solid impression to provide for the owners and coaches. The Eagles were up 20-0 but allowed the Redskins to claw back 13 unanswered points, challenging the nerves of the visiting team, but Washington fell just short as the clock wound down.

Alex Smith and his 49ers mustered a solid win against previously undefeated Detroit,   joining the Lions at a highly impressive 5-1 record. The Lions had hopes of furthering their perfect campaign, but inviting the San Francisco squad is proving to be a worrying move these days. Courageous on the road and fierce at home, this team is legitimate. The 49ers seem to still be flying under the radar, despite their excellent numbers and resounding wins. They are talented cats indeed, and one would be ill-advised to count them out of the deep-playoff discussion.

Tampa Bay’s Josh Freeman was angry about last week’s demolishing, and showed up at  his home ground with something to prove. Defeating one of the league’s best  quarterbacks in Drew Brees is nothing to sneeze at, certainly considering the strength  of the New Orleans Saints squad. The Bucs came through in the end and now match the  Cajuns at 4-2 on the season.

Oakland is on a streak, also holding a 4-2 record, as well as the Pittsburgh Steelers, who seem to have not taken kindly the rumors that they were on the way out of serious discussion. The 2011 season is shaping up nicely, with a lot of teams still very much in the hunt for top honors. Bye-weeks are giving a number of rosters time to reflect, re-energize and come back with fervor, but can anyone stop the Packers? Aaron Rodgers has both eyes on the Lombardi trophy, and who could argue with him.