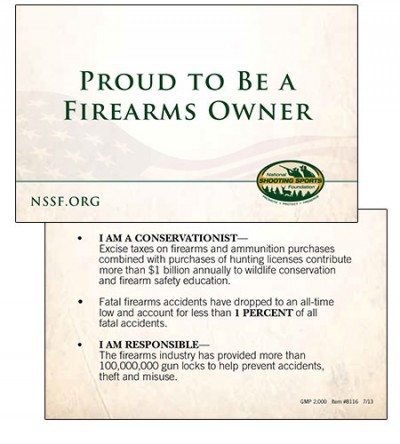 With its new “Proud to Be a Firearms Owner” pocket card, the National Shooting Sports Foundation is arming the nation’s 100 million gun owners with facts they can use to demonstrate they are law-abiding, safe, passionate in their defense of the Second Amendment and major supporters of conservation through their purchases of firearms and ammunition.

“Firearms owners have been misrepresented and even maligned in the ongoing public debate over gun legislation,” said NSSF President and CEO Steve Sanetti. “Our goal is to remind gun owners they have many reasons to be proud. You should stand tall, and if someone takes an unfriendly shot at you for being a firearm owner, respond with the facts listed in our new pocket card.”

Among the 13 bullet points on the Proud to Be a Firearms Owner card are these:

We hope that you can state another reason listed on the card as a source of pride:

Another bullet point may provide an ideal way to end a challenging exchange: