By Kevin Price, Publisher and Editor in Chief.

In the opinion of this observer of the President’s “unprecedented” remarks on the potential “unprecedented decision” by the court to overturn Obamacare, I thought it had Orwellian “newspeak” written all over it.  Hotair’s headline may have put it best, “Obama: I sure hope the Supreme Court doesn’t do something unprecedented by striking down ObamaCare.”

Barack Obama has gotten himself in the habit of lecturing the Supreme Court on a regular basis.  The most famous being in January 2010 during the State of the Union address, in which Supreme Court Justice Alito mouthed “not true” during the President’s speech. 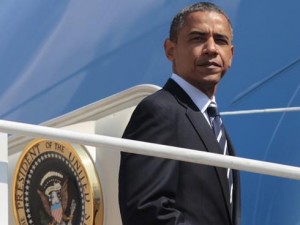 Last week, the President’s most important domestic policy achievement — socialized medicine — received an incredible push by the US Supreme Court. It appears some (and likely the majority) see neither a constitutional basis for specific parts of the law and maybe for the entire law itself. This week, when addressing reporters, Obama said that “Ultimately I am confident that the Supreme Court will not take what would be an unprecedented extraordinary step of overturning a law that was passed by a strong majority of a democratically elected Congress.” He told reporters while speaking with Canadian Prime Minister Stephen Harper and Mexican President Felipe Calderon.  It is amazing that the President maintained a straight face, considering that the “strong majority” he referred to was seven votes in the US House.

Obama went on to remind reporters that conservative commentators, have complained about “judicial activism or a lack of judicial restraint,” that “an unelected group of people would somehow overturn a duly constituted and passed law.”  “Duly constituted?” This is the “newspeak” part. George Orwell, author of 1984, would be impressed by the language chosen by Obama, I’m sure. For over 200 years the court has weighed in on the constitutionality (or lack of) when it comes to legislation. Such an action by the court is many things but “unprecedented.” Sadly, through those 200 years, the majority of those decisions showed anything but “judicial restraint.” A great example of this is the “right to privacy” (not a general right in the Constitution) that became the basis for Roe vs. Wade and abortion on demand. Them saying “no” to something clearly not in the Constitution, as in the case of Obamacare, would be the exact opposite of the “judicial activism” Obama claims he fears; but simply the enforcing of the law of the land. This would be a refreshing change for the men (and ladies) in black.