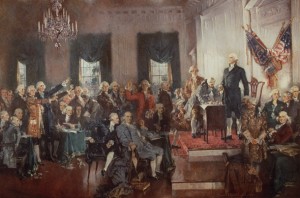 With tens of millions of Americans watching, Barack Obama stood at the West Front of the U.S. Capitol on January 20, 2009, with his left hand on the Bible and his right hand held aloft, swearing to God and country that he would preserve, protect and defend the Constitution of the United States. Yet despite that pledge, President Obama has time and time again taken actions contrary to the principles of the founding document he swore to uphold, setting forth on a heretofore uncharted path of unconstitutionality that will fundamentally change the character of this Republic for the worse, not for the better.

Last week, America erupted in protest against one of those actions — the White House’s determination to force all insurance plans to cover, at no charge, contraceptives, abortion-inducing drugs, and sterilization as part of Obamacare. That mandate includes employers like Catholic hospitals, Christian schools, and faith-based pregnancy care centers, all of which must offer the coverage, regardless of their beliefs. This assault on the First Amendment’s protection of religious liberties met with opposition from all corners, prompting the president on Friday to address the American people and pledge his commitment to protecting religious liberties by offering an “accommodation” to these institutions — forcing insurance companies to offer free contraception so religious institutions don’t have to.

The trouble is, that “accommodation” was merely hypothetical and Obama’s commitment to protecting religious liberties was illusory. Obamacare’s anti-conscience mandate did not change in a final rule that was posted later that day. And even if the president’s hypothetical became reality, Heritage’s Jennifer Marshall explains that the religious liberty problem still remains:

It does not disentangle religious employers, since insurers will shift the burden back to religious groups through higher premiums in one form or another. Nor does it address the potential religious liberty concerns of other employers or individuals.

This is only the beginning of the problems Americans will continue to see as the Obamacare ‘essential benefits’ package takes shape. The anti-conscience mandate is a warning sign for us all of how one-size-fits-all health care requirements will trample religious liberty as well as individual liberty.

Yesterday at The Heritage Foundation, Senator Roy Blunt (R-MO) spoke of his opposition to this latest Obamacare mandate. Afterward, in an exclusive interviewwith Heritage, Blunt called the move a “genuine assault on First Amendment freedoms” and dismissed the president’s proposed “accommodation” as nothing more than an “accounting gimmick.” “This is not about cost. It’s about the Constitution,” Blunt said. “And if you can decide this no longer offends me because I don’t have to pay for it, I guess your concern is financial all the time and not faith-based.”

Unfortunately, the president’s disregard for the First Amendment is not his first assault on the Constitution. Earlier this year, President Obama cast aside our government’s fundamental separation of powers when he made four unconstitutional appointments without bothering to seek the advice and consent of the U.S. Senate, as the Constitution requires.

Yesterday, Senator Mike Lee (R-UT), who was among the first to warn about the consequences of the president’s unilateral action, spoke at Heritage about the ramifications of those appointments. In an exclusive interview, he explained that today, more than a month after the illegal appointments, a new director is running the Consumer Financial Protection Bureau and three members of the National Labor Relations Board are conducting business — all in blatant violation of the Constitution.

“This is not a partisan issue for me. I would be equally outraged if this were a Republican president doing this same thing,” Lee added. “Once this gains some momentum, this practice could be very destructive to the Senate’s prerogative of advice and consent. This is a power that doesn’t belong to the president. It belongs to the people of the United States of America.”

President Obama, of course, offers justifications for his actions. In the case of the illegal appointments, he says that he simply “can’t wait” for the Congress to act. In the case of the Obamacare contraception mandate, he insists he is acting in the best interest of the American people, while offering a “fair” accommodation to religious institutions. The trouble is that the president is measuring himself against his own subjective standard while disregarding the objective limitations on his power.

In a government where there are no practical limits on executive overreach, there are likewise no limits on the government’s ability to impose its will on the people. With the president’s trampling of religious liberties, the country is getting its first taste of the consequences of Obama’s unmitigated power grab. And if this power remains unchecked, there are certainly more consequences to come.