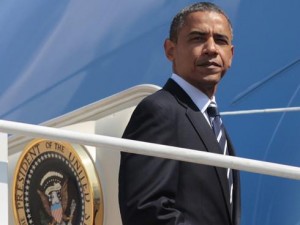 The article is from Kevin Price’s column in Huffington Post:

Recently President Barack Obama was on CBS’ 60 Minutes discussing the problems the U.S. has had in dealing with the Islamic extremist organization, ISIS. During the interview there was a candid moment in which the interviewer, Steve Kroft,questioned the U.S.’ slow and, until recently, limited response.

Steve Kroft: “What? How did they end up where they are in control of so much territory? Was that a complete surprise to you?”

President Obama: “Well I think, our head of the intelligence community, Jim Clapper, has acknowledged that I think they underestimated what had been taking place in Syria.”

Kroft was noticeably surprised by the President’s candor and seemed to want to provide him a way out, saying, “I mean, he didn’t say that, just say that, we underestimated ISIL. He said, we overestimated the ability and the will of our allies, the Iraqi army, to fight.” Obama goes on to criticize the former President for the mess (not George W. Bush, but Maliki of Iraq in this case), saying:

Well, here’s what happened in Iraq. When we left, we had left them a democracy that was intact, a military that was well-equipped, and the ability then to chart their own course. And that opportunity was squandered over the course of five years or so because the prime minister, Maliki, was much more interested in consolidating his Shiite base and very suspicious of the Sunnis and the Kurds, who make up the other two-thirds of the country. So what you did not see was a government that had built a sense of national unity.

The conversation goes on to discuss the future of Syria and does not offer much hope for peace and stability in the region, but the important statement was about the intelligence situation. It was said, almost in passing, but has become the takeaway for the interview and has been widely discussed in media and public policy circles. The statement appears to be without any basis in reality.

Nearly eight months ago, some of President Obama’s senior intelligence officials were already warning that ISIS was on the move. In the beginning of 2014, ISIS fighters had defeated Iraqi forces in Fallujah, leading much of the U.S. intelligence community to assess they would try to take more of Iraq.

Lake states that he interviewed one Pentagon official who said, “Either the president doesn’t read the intelligence he’s getting or he’s bullshitting.” He went on to say that the official was “flabbergasted”. This seems…(read  more)