Were John Kerry and the Vietnam veterans’ organization he led the real reason the Republicans broke into Watergate in 1972, with information on them the target of the espionage?

Bob Weiner, the 1971-72 Youth Voter Registration Director for the Young Democrats office at the Watergate headquarters of the Democratic National Committee and later a Clinton White House staffer, is asking these questions after doing a little research to refresh his memory. Weiner looked in the Senate’s Watergate Hearings in volumes held by the Library of Congress and researched Kerry’s specific assistance to the Party’s ’72 effort, a Rhode Island speech supporting youth voter registration, in the Providence Public Library’s archives.

Here’s what Weiner has confirmed: 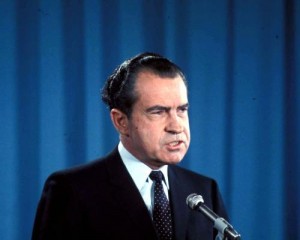 The quest for information on Kerry Brought Nixon Down?

James McCord of the Watergate burglars and CREEP (Committee for the Reelection of the President) testified before the Select Committee on Presidential Campaign Activities on May 18, 1973 and was asked by Senator Daniel Inouye (D-HI) why the break-in was conducted. McCord replied, “Democratic national headquarters staff members” were “working closely with violence groups”… “which involved violence and demonstrations against our committee.” When Senators Inouye, Lowell Weicker (R-CT), Ed Gurney (R-FL), and Howard Baker (R-TN) asked for more detail, in each case McCord repeated the “violence” reference but specifically – and only — named the “Vietnam Veterans Against the War,” accusing them as “a violence-oriented group” (Hearing pages 180, 200, 201, 223-24 and elsewhere, May 18 and 22 testimony).

So what was the actual connection that the national Democratic office had with Kerry? Kerry was the public spokesperson and national chairman of the Vietnam Veterans Against the War. At the request of the Rhode Island Young Democrats, Weiner invited Kerry to speak, to urge youth voter registration, at the Rhode Island Young Democrats’ convention in Providenceon February 12, 1972. Kerry accepted and spoke – as documented in the Providence Journal of Feb. 13, 1972. Kerry also in a news availability there called for Nixon’s impeachment – as later did the House Judiciary committee by a 28-10 vote before Nixon resigned.

Weiner recalls, “That’s ALL that we did with John Kerry and the Vietnam Veterans Against the War – invited him to give a voter registration speech to help increase youth voter participation, and he accepted. That’s just God, Mother, and Apple Pie. It shows the paranoia and overcharged actions that Republicans used against him — and the extremes that they would go to against him and the Democratic Party — even back then when he and the Party were doing nothing together but positive voter involvement. Nothing is more American than that. We did have one other link with him: we invited him to give a similar speech to the Wisconsin Young Democrats a few weeks later – but he was busy that day.”

In his May 18, 1972 Senate testimony, McCord conceded, “Part of the reason attributed to the operation was political” (page 173). Under further questioning by Senator Inouye, he also admitted the acts were “wrong… a mistake.”

Weiner is bringing out the story as an “important part of history now as we recognize the 40th Anniversary of the Break in on June 17.”

When Weiner heard the McCord testimony back in 1973, he immediately called Mary Lou Burg, then Vice Chair of the DNC, “to express outrage because of what the real story was in contrast,” and Burg approved Weiner’s presenting the facts to the Watergate Committee. Weiner did so at a meeting with Senator Joseph Montoya (D-NM), a committee member, and his then Chief-of-staff Bob Baca.

Following his Watergate youth voter registration position, Weiner has served as legislative assistant to Ed Koch, Staff Director of the House Aging Committee under Claude Pepper, communications director for the House Narcotics Committee under Charles Rangel and the House Government Operations Committee under John Conyers, and Director of Public Affairs for the White House National Drug Policy Office under Drug Czars Lee Brown and Barry McCaffrey. He now is president of a public affairs and issue strategies consulting company.

Weiner added today, “I’m so glad Woodward and Bernstein have just said that Watergate is far more than the break-in.  It’s about espionage, bribery, blackmail, illegal finances, destroying the fabric of democracy and the Constitution, and a President thinking he’s above the law and is the law.  We as Watergate political staffers knew immediately that the break-in and the coverup reached to the top, because in politics, you are proud to let your boss know what you do and you work with him/her. As Woodward and Bernstein have just written once more,  Nixon helped design the various financial and espionage plots from the outset and then led the coverup of events and the  harassment of federal agencies to violate the law.”