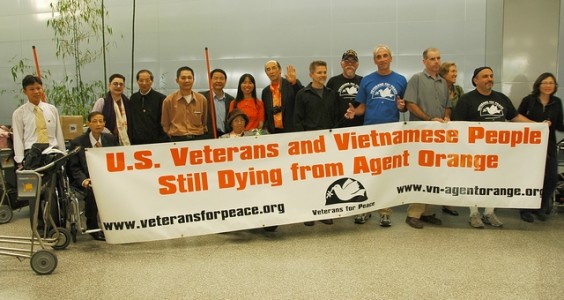 The Department of Veterans Affairs has an image problem. The VA has been vilified because its backlog of cases has grown to mindboggling levels. And while it’s no newsflash that bureaucratic gears grind slowly, Peter Sills says there’s a lesser-known reason for the backlog: decades’ worth of government refusal to do the right thing. What’s worse, he adds, this line of long-suffering veterans is a shameful testament to the government’s unofficial policy on veteran woes: lie, deny, and cover up.

“For decades, the VA refused to acknowledge that anyone could have been harmed by military herbicides used during the Vietnam War,” says Sills, author of Toxic War: The Story of Agent Orange (Vanderbilt University Press, 2014, ISBN: 978-0-8265-1962-7, $39.95). “After decades of stalling, the VA is finally granting benefits to Vietnam veterans suffering from health problems that could have been caused by exposure to military herbicides, such as Agent Orange. This means that hundreds of thousands of Vietnam vets have been added to the rolls and are finally getting the help they deserve. But what came before were years of government cover-up.”

In Toxic War, Sills describes the production and use of Agent Orange and other American poisons used in Vietnam and how the VA and the military, with the help of other federal agencies, denied that these chemicals were capable of causing harm.

During the Vietnam War, the government hid the truth about Agent Orange from the world. The U.S. assumed that most of the world would be horrified by the use of Agent Orange and other compounds. So it did its best to conceal the program’s existence.

The dangerous chemicals were sent overseas without any warning labels. “American servicemen were told that these herbicides were completely harmless, so no one took any precautions when handling them,” says Sills. “Essentially, Americans and Vietnamese were unnecessarily exposed to poison so the U.S. could be protected from bad publicity.”

When veterans became sick, the VA ignored their problems. After Vietnam vets came home, the VA systematically covered up the truth about military herbicides. Toxic War shows how the VA dodged evidence and manipulated facts to make it appear that these herbicides were harmless.

The government sponsored deliberately bad science to cover up the truth. Almost all of the studies conducted on veterans who’d potentially been exposed to herbicides were terribly done and are now largely discredited.

“If government scientists had merely done a bad job, then their results would have been all over the place,” notes Sills. “But all those wrong findings pointed in just one direction—that Vietnam vets weren’t harmed by these chemicals. This couldn’t have been a coincidence.”

The government consistently tried to prevent “Agent Orange” veterans from getting the help they’ve needed. “Whenever the agency lost a round, it would fight the same battle again and again, and keep losing over and over,” says Sills. “It didn’t give up until Secretary of Veterans Affairs Eric Shinseki finally agreed to grant benefits to anyone who suffered from diseases that could have been caused by herbicide exposure, according to the best available science.”

Sadly, the government’s unwillingness to accept responsibility wasn’t an aberration. It has also tried to minimize the harm caused by toxins during the wars in the Middle East.

“There is a terrible disconnect between the inevitable demand to support our troops in wartime and how we treat those same troops after they come home,” says Sills. “It is extremely unfortunate that political expedience has consistently trumped the proper care of our veterans. It isn’t just that their health problems have been ignored. The government has actively covered up the truth about what really happened to our troops.”