Special by Park Chase Press for US Daily Review. 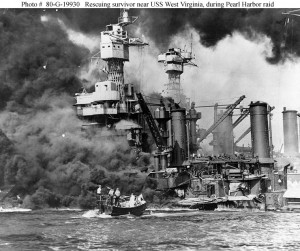 With the 70th Anniversary of Pearl Harbor upon us, Park Chase Press has released Searching for Sgt. Bailey:  Saluting an Ordinary Soldier of World War II by James Breig.  This wonderful book explores the story of one Sgt. Bailey while introducing many other ordinary men and women who answered the call, dutifully did what they were asked, and returned home to anonymity.

Drawing on military records and V-Mail letters that Sgt. Bailey sent to his mother and others, numerous interviews with those who knew him and other sources, award-winning author Breig skillfully reclaims one forgotten serviceman from obscurity. And in doing so he captures life in an Army training camp, time aboard troop transports heading overseas, New Guinea’s significance in the string of fierce battles to reclaim the pacific, the battle in the skies and the battle with weather and disease, the importance of support troops (quartermasters, engineers, mechanics) who made victory possible, the clever creation of V-Mail, and the massive demobilization at the end of the war.

Heroes of the “Greatest Generation” have been rightly honored for their exploits on Normandy’s beaches, along Iwo Jima’s sands and in the air above Germany. But, as this book with a unique perspective proves, there are other kinds of heroes: the unnoticed millions who deserve to be saluted because they did their duty.

“James Breig gives us reason to pause and live a few moments in the life of Sergeant Bailey, an average World War II soldier. Let’s not forget him or any of the others, regardless of the conflict or the size of their sacrifices.”
—Edward Zapletal, publisher, History Magazine

“At last, the essential soldiers behind the lines get their due. A must read!”
—Luther Hanson, curator, US Army Quartermaster Museum, Fort Lee, Virginia

James Breig has authored a syndicated media column reaching more than a million readers and has won numerous national awards for his articles, editorials and columns. He now focuses on writing about American History for such publications as the Colonial Williamsburg Journal and History Magazine.