By NFIB, Special for USDR.

Chief economist for the National Federation of Independent Business (NFIB) William C. Dunkelberg, issued the following statement on theMay job numbers, based on NFIB’s monthly economic survey that will be released on Tuesday, June 11, 2013. The survey was conducted in May and reflects the responses of 715sampled NFIB members:

“After a five-month swing in the right direction, small firms were shrinking again in May: Small employers reported an average gain of negative 0.04 workers per firm—essentially zero. The news here is that the steady, but painfully slow journey toward positive job creation can’t seem to maintain any steam. We have only to look to Washington as to the reasons why. 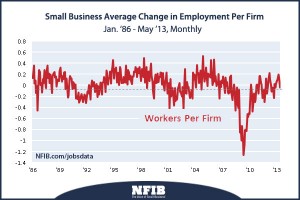 “Nine percent of owners surveyed by NFIB (down 4 points) reported adding an average of 2.6 workers per firm over the past few months. Offsetting that, 12 percent reduced employment (down 1 point) an average of 3.0 workers (seasonally adjusted), producing a seasonally adjusted gain of negative 0.04 workers per firm overall. The remaining 79 percent of owners made no net change in employment.  While employment reductions continued to fade, hiring failed to hold up its end of the job creation picture. Initial claims for unemployment have been trending down in recent months, but this appears to be due primarily to a decline in the number of firms reducing employment rather than a pickup in hiring.

“Forty-seven (47) percent of owners hired or tried to hire in the last three months and 38 percent (81 percent of those trying to hire or hiring) reported few or no qualified applicants for open positions.

“Nineteen (19) percent of all owners reported job openings they could not fill in the current period (up 1 point), and 13 percent reported using temporary workers—a number that has changed very little over the past 10 years. The health care law provides incentives to increase the use of temporary and part-time workers, but this indicator has not registered a trend toward the use of more temps.

“Owners are still quite pessimistic about economic recovery, though far less so than six months ago. It will take a marked improvement in sales to convince them to hire more workers and prospects for that are not good.”