The Voice of America reports: 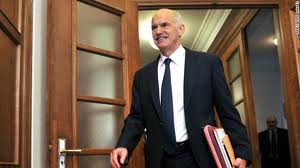 Political leaders in Greece reached an agreement Sunday night to form a new unity government, a move that will allow the debt-ridden country to secure a European Union bailout.

Throngs of reporters outside the gates of the presidential palace in Athens were on hand when word came a few hours later.

Reporters from Greek national media read the statement from the president’s office.

The statement said Mr. Papandreou and New Democracy party leader Antonis Samaras had reached a preliminary agreement to form an interim government, and that Mr. Papandreou will not lead the new government.

The statement added that the two men are… (read more)