Why the 2-party system is here to stay.

By Malcolm Out Lout, US Daily Review Contributor. 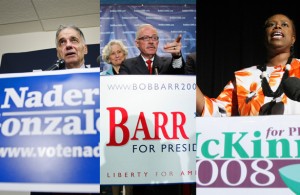 Voters say they are frustrated with the partisanship that is dividing America. With Democrats and Republicans sit at polar opposites on most issues. is there hope for a true 3rd party to emerge as a strong force in our politics?

Ten years ago, as many as 65 % of Americans approved of their elected officials. Today’s Congress’s popularity has fallen to an all-time low – a 9% approval rating.

Clearly, the public is fed up with scenes of partisanship obstructionist: Take for example the super committee that was supposed to come up with a plan to cut the federal deficit by at least $1.2 trillion and present its recommendations by Thanksgiving. On November 21, the committee issued this statement “After months of hard work and intense deliberations, we have come to the conclusion today that it will not be possible to make any bipartisan agreement available to the public before the committee’s deadline.” It was destined to fail..

Just a few months before, Americans were on edge and the media was in a frenzy over the debt ceiling crisis. At the last minute a deal was struck to raise the debt ceiling and cut spending. In the process, extreme partisanship was once again on display.

Would the situation have been different is a 3rd party was in play? would it alter the dynamics of congress?

There are many 3rd parties in the US: The largest ones are the Constitution party, the Green Party and the Libertarian Party. They each count over than 100,000 registered voters.

They are not the only parties in existence, there are plenty more: let me give you a few…
America First Party
Christian Liberty Party
America’s Party
Americans Elect
Citizens Party
Independence Party of America
Working Families Party
Labor Party
Party for Socialism and Liberation

And that is just a few.. there are many many more..

The point is:  Why have we not seen a strong alternative to the democratic and Republican parties emerge? Could a 3rd party get significant support from the American public?

According to a Gallup Poll, 52% of Americans call for an alternative to the GOP and the Democratic Party. They are clearly frustrated with how much ideology plays into politics.

However, we need to recognize that we as citizens are almost conditioned to pick a side early on.. Did you grow up in a republican household? or a liberal one? most of us can answer that question right away… We are polarized and stick to “our side”.

The closest 3rd party candidate to breaking off was Ross Perot:  In 1992 Ross Perot ran for president and received 18.9% of the popular vote. In 1995, he founded the Reform Party and won its nomination for the 1996 election.  But what happened to the Reform Party? it fizzled and lost influence and never achieved critical mass.

That is a critical point for 3rd parties: if they fail to build a platform that is unique and different, their issues will inevitably be taken over by either Democrats or Republicans, and their supporters absorbed.

the closest we are to a 3rd party is with the Tea Party, which is at the moment under the GOP banner. The Tea Party’s message of smaller government, lower taxes and reducing the federal debt had an impact on the 2010 elections, and its supporters helped elect dozens to Congress.

As much as we may be unhappy with it, the 2 party system is here to stay!

About Malcolm Out Loud: Social and political news commentator Malcolm Out Loud is also the host of WebTV show Malcolm Out Loud TV, an acclaimed motivational speaker, founder of Brink Thinking and the author of the book Smash The Competition. More about him at www.MalcolmOutLoud.TV