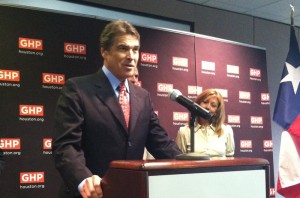 For months I have struggled with the list of candidates that were campaigning for the GOP nomination.  One of the key issues in 2012 will be Obamacare and since that program was based significantly on the work of Mitt Romney, he will be impotent in taking on the President in one of the most important issues.  There are various members from the House who have levels of merit, but are running from a position that is impossible to lead to a White House victory.  James Garfield was the one and only House member to win the White House.  I simply do not see that happening again any time soon.  There are also other candidates that carry particular strengths, but in the end you have to doubt their ability to really catch  on.

I live in Texas and have experienced ten years with Rick Perry as governor.  I have seen the good, the bad, and the ugly and have had tremendous anxiety over a possible Perry run.  On the other hand, he may be the only Republican interested in the job that can win.  With that, US Daily Review is offering the following debate on Perry vs. Perry. I am taking the interesting position of defending both  views.

The Case against Rick Perry

Many have been arguing that the debate platforms we have been seeing have been missing someone or something. Many believe the race needs an answer to Mitt Romney, according to many conservatives The popular answer to Romney, we are told, might be Rick Perry, the governor of the great state of Texas.  Perry has Sarah Palin rhetoric, a certain amount of charisma, and a wide open field to take advantage.  On paper, he looks like the answer to the conservative wing of the Republican Party.  A more serious examination, however, will find many issues that conservatives will struggle with when it comes to Perry.  His franchise tax has haunted him ever since it became a law.  That bill put a tax on items and services that companies had to pay just in order to stay in business.  For example, if a doctor needed a new technology, he would be subject to a tax on it, even though the federal government would treat it as a right off.  Essentially it is “taxation without representation” of money actually earned.  Then there was his pursuit of a Trans-Texas Corridor, a super highway that would undermine property rights and confiscate the dollars of drivers.  Finally, pro-family conservatives in Texas were unhappy with Governor Perry’s efforts to try to force teenage girls to get a vaccine for HPV, a sexually transmitted disease.  These are issues that have haunted the Texas governor and would certainly follow Perry as a presidential candidate as well.  Perry has great rhetoric, but not the record to match.  Conservatives may have to look elsewhere for an answer to Mitt  Romney.

The Case for Rick  Perry

Rick Perry is one of the only politicians to have embraced the Tea Party early and entirely.  While other politicians tried to maintain a distance, Perry was actually involved in strategy meetings for the movement early on.  Although his vaccine for HPV program was a disaster, he still has one of the strongest pro-family records and rhetoric of any candidate in the race for the White House.  The conservative movement has been looking for a “three legged stool Reagan conservative” (social, defense, and economic) for years and on paper, Perry fits that bill better than any GOP nominee since the Gipper himself.  Like Reagan, Perry is a former Democrat who saw his party leave him. Becoming a Republican only made sense.  Most of the candidates on the GOP side take almost a professorial tone in the way they talk about the country and its future.  Perry has a “role up your sleeves” demeanor and seems very impatient when it comes to those who want to talk when our nation is in such desperate need for action.  Perry and his team also realize that his pro-family rhetoric may not be widely received in northern states around the country.  However, his view and experience when it comes to job creation should resonate.  He is, wisely, focusing almost entirely on the economy in all of his stump speeches.  According to economists, anywhere from one-third to one-half of all jobs created in the country were in Texas over the last two years.  Meanwhile, Obama is overseeing the worst economy since the Great Depression. Perry could be the perfect candidate for times such as this.  Finally, Obama was the first sitting US Senator to be elected to the White House since John F. Kennedy. Governors have been one of the strongest place to find a president, which is another reason Perry could be quite  strong.

Many have been waiting for the right person to arise for this, the most important job in the country and at the most important moment in history.  They have looked at the lot the GOP has to offer and it is simply incomplete and inadequate.  At this late point, the reader has to ask if there is anyone who could come on the scene who can challenge Obama like Rick Perry.  If you believe Obama “must go.”  The choice for who to support is likely to become  simple.