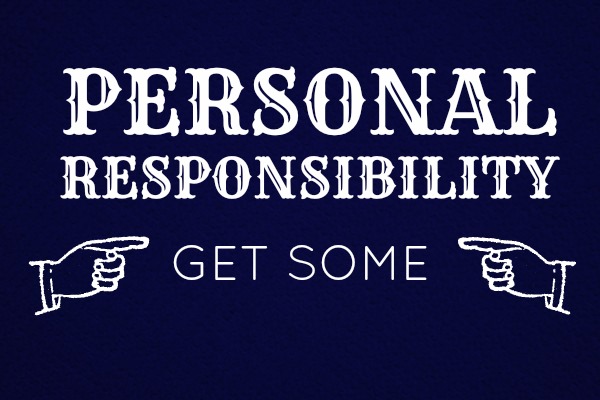 One of the greatest problems we face in America today is an entitlement society adamant about shuffling off personal responsibility. They have literally taken the Teflon Don as an example and refuse to accept responsibility for any of their actions. Let’s break it down and you’ll see exactly what I mean.

First and foremost let’s look at men who have sex every woman who allow them to. Babies are being born into single parents families if they aren’t aborted. These women continue to go out and party, often leaving the children to be raised by their grandparents. The days of the majority of society being responsible parents are less and less and instead, we have people busily “finding themselves” or “having fun, because it’s their right” instead of raising the child they chose to have. They promptly go on the government dole and call it good. In their opinion, the government owes them and they deserve to be taken care of . . . but that’s a lie.

Now let’s take a look at professional athletes. Those raised in difficult circumstances who have made it big but refuse to leave the thuggish behavior behind, are just ridiculous. Here they have been given the job they worked toward their whole lives, natural skill and luck got them into the majors. They have loads of money, adulation and attention, but they still commit crime after crime as if it is their every right. Here’s an idea, be grateful that you are no longer struggling, be happy that you have a new lease on life and live it to the fullest, making an honest contribution to society instead of raping it.

And as a last example, lets look at college students and the rarified air they think they live in. Our institutions of higher learning have largely been taken over by those espousing the liberal line of thought. It encourages irresponsibility and the belief the students emerge with that they should have what their parents worked forty years for, but they expect it right now. They don’t want to work for it, they want to take it from others who have worked their entire lives for their success. Hence their attempt to take over Wall Street and their attempt to rob people because it was “their right.”

These are just three examples of this cancerous phenomenon sweeping through America. This nation was founded by people who dedicated their lives, their fortunes and their sacred honor in order to fight for the creation of and building up of America. Throughout our history men and women have sacrificed everything to build America. Fast forward to the decade after decade of invention after invention. Recall the day when a neighbor was in trouble everyone pitched in to rectify the problem. Remember when we celebrated the successes of our fellow Americans, grateful for the jobs that have been produced by small business and corporations that emerged. Remember when being an adult was good, and the bulk of society chose to focus their lives on their families and providing for them.

American exceptionalism is a very real thing and it was born of the freedom to be who we wanted to be and either fail or succeed. Generally, we believe in trying over and over until we are successful. Abraham Lincoln, one of America’s greatest presidents, is a perfect example of trying over and over until he succeeded, ultimately leading America through one of our darkest periods, determined to keep the union in one piece.

Until we are willing to stop being so self-absorbed and start putting those we love first, in addition to taking responsibility for our actions and choices, this nation cannot be saved. Until we put family first, for no success in this world can compensate for failure in the home, and rebuild society as a healthy and strong one, America will continue to falter. Despite what Barack Obama has said, the world is on fire and America is stumbling. We must take responsibility for ourselves and our actions and rebuild this nation as an ensign to the nations of the world of freedom and liberty. It all begins with personal responsibility. And remember, life is not fair. It never has been, and never will be. Find your happiness, hold on to it, and continue to fight that fight. America is depending on you taking responsibility. Cowboy up, people. It’s way past time.