The following are statements from budget and tax experts at The Heartland Institute.

“Intransigent police, firefighter, and teacher unions delivered the final, death blow to the city of Detroit. But other major cities have been able to deal with such intransigence without having to resort to bankruptcy. What ultimately killed Detroit was its culture of dependence and victimization – the same culture that elected and re-elected our President and which threatens to destroy the entire nation. The city always and invariably blames its shortcomings on everyone but themselves – on inadequate federal and state subsidies and on the “racism” of those who identify, quite correctly, those policies as the cause, rather than the solution for the cities’ downward spiral.

“Going forward, Detroit should follow the example of Wisconsin’s Scott Walker, who first as Milwaukee County Executive and then as the state’s governor, took on the unions, promoting privatization and extending school choice that was instituted by former Governor Tommy Thompson. But that will not be enough. Detroit must embrace the wisdom of the immortal Pogo: “We have met the enemy and he is us.” Individual responsibility and self-reliance must become the motto and watchword of every politician and citizen. When it does, the sky will be the limit for Detroit.”

Thomas Walton worked in Detroit for 33 years as an economist at General Motors.

“Detroit is the largest city to declare bankruptcy, but it won’t be the last. Cities like Detroit have relied on property taxes to support bloated spending for too long. Instead of making promises to employees and building projects they cannot afford, cities should make long term plans that embrace a competitive tax structure that functions reliably in good times and bad. One solution that should not be considered is a federal bailout, throwing taxpayer dollars pulled from around the country to prop up a thoroughly broken and mismanaged system is not only irresponsible, but a complete waste of money. 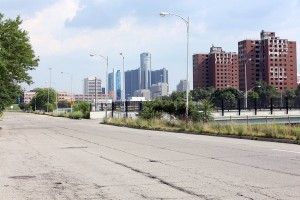 “The primary issue Detroit faces, unaffordable public pensions, is a serious problem, but solutions do exist. In the short term, per-year pension payouts should be capped at a sensible level, the retirement age should be raised, double-dipping should be eliminated, pension rate of return assumptions should be changed, and workers should be required to make higher contributions. In the long term, sustainability will require governments to follow the private sector’s lead and switch workers from defined-benefit pension systems to defined-contribution systems.”

“Every mayor of Detroit for the last half-century has been a Democrat. And the city’s most famous industry, giving it the moniker The Motor City, has been, for the same time period utterly dominated by unions.

“Democrats and unions work in concert to bleed taxpayers to create a vicious cycle of payments (and commitments for future payments) to unions – part of which get donated to Democratic campaign coffers – with the elected Democrats then raising taxes, sending more money to unions, etc. This is not unique to Detroit, though the utter dominance of the fiscally unholy marriage reached its pinnacle in the city which has lost a quarter of its population in the last decade – the quarter which was paying taxes, apparently – and nearly 60 percent since its peak nearly 60 years ago. Detroit was the only one of the nation’s top 25 cities to lose residents in 2012.

“There is no model of government likely to more quickly reach Margaret Thatcher’s warning that ‘the problem with socialism is that eventually you run out of other people’s money.’ While Detroit’s system may not have been precisely socialist, its fundamental premises, especially the idea that laborers are noble and the holders of capital are evil exploiters suitable only for financial bleeding, were the same.

“So what is most surprising is not that Detroit has filed for bankruptcy but that it took so long, and that there were enough suckers available over the last few years who bought Detroit bonds despite a future that should have been absolutely obvious. Unfortunately, there’s a whole other pool of suckers: American taxpayers who had billions of dollars wasted by the Obama administration bailing out uncompetitive car companies and, as always, their unions. Indeed, if the auto industry had not had an infusion of life blood stolen from the economic arteries of America, Detroit itself would have sooner reached its inevitable fate.”

It’s going to get very rough because a bankruptcy judge would have the authority to abrogate government employee union pension deals. If that happens, cities and even states around the country would be smart to consider declaring bankruptcy. Could Illinois be next? Oh, wait, I said smart.

“Detroit’s bankruptcy filing is the epitaph on decades of failed city government policies that brought a great metropolis to its knees. Over the coming weeks and months much of the media attention will be on the bankruptcy proceedings, themselves, as the courts and responsible parties determine how to reorganize the city’s debt liabilities among the claimants.

“What will be far more important in terms of Detroit’s long-run future will be the public policies that become the basis for the city’s revitalization and reconstruction. In a new national and global commercial environment, Detroit must make itself attractive and competitive to draw in industry and trade – and the accompanying job opportunities – back into what can no longer be considered the exclusively ‘Motor city.’ “

“Those of us who work more closely on state and local economic and reform issues know that Detroit is the first of many. Nearly all reform controversies come down to taxpayers versus unions – especially public sector unions. In my areas of engagement, educational reform and tax reform, all of the well-funded opposition to reform comes from various public-sector employees’ unions.

“We are relatively successful in keeping the train on the rails in Georgia and attract population and companies from states and cities who are failing in the taxpayer/unions battle. But, the ultimate question is whether states are really free to be laboratories of democracies. Will the failing cities and states be deemed ‘too big to fail.’ I’ll be watching in the next weeks and months for federal government backdoor-bailouts of Detroit. Will the teachers, state government employees and taxpayers of Georgia and other disciplined and frugal states, eventually pay for the less-disciplined in Detroit….and those that follow?

“The White House response? Not promising. ‘While leaders on the ground in Michigan and the city’s creditors understand that they must find a solution to Detroit’s serious financial challenge, we remain committed to continuing our strong partnership with Detroit as it works to recover and revitalize and maintain its status as one of America’s great cities,’ said Amy Brundage, a White House spokeswoman. This means Georgians pay.”

“It’s a shame to see a proud city such as Detroit fall into bad times. In its heyday, Detroit was the center of the automobile industry and helped a population of almost 2 million thrive. But that was over 50 years ago. Today, Detroit is down to a population of around 700,000 and owes its creditors $18.5 billion. That adds up to over $26,000 per each man, woman, and child in the city. With an unemployment rate close to 20% and per capita income just above $15,000 annually, no wonder Detroit is bankrupt.”

The Heartland Institute is a 29-year-old national nonprofit organization headquartered in Chicago, Illinois. Its mission is “to discover, develop, and promote free-market solutions to social and economic problems.”