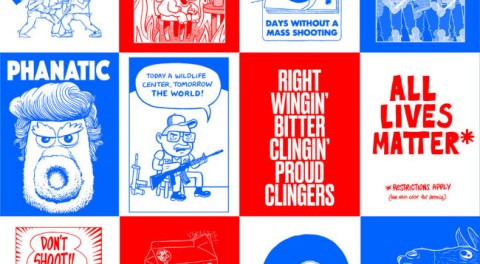 First Look Media in conjunction Matt Bors, award winning cartoonist and founder of The Nib, today announced the relaunch of The Nib with a new website and daily newsletter, just in time to bring fans two cartoon-filled weeks of convention coverage. First Look Media and Bors also announced that The Nib team and contributors will be taking over Philadelphia’s historic Snyderman-Works Galleries to sketch the Democratic National Convention and to invite readers to check out their “campaign headquarters.” The space (303 Cherry Street) will be open to the public while the cartoonists are working, Monday through Thursday, July 25-28, from  12-6pm.

Created and edited by Pulitzer Prize finalist and Herblock Prize winner Matt Bors, The Nib delivers engaging and provocative social commentary in the form of political cartoons, comics journalism, and non-fiction writing from a diverse team of contributors. First Look Media’s Product and Tech teams worked with Bors to design a new mobile first image-based website. The site was developed to provide the best possible experience for reading and sharing  comics.

Matt Bors said, “We’ve teamed up with First Look Media to do more of what we’re good at: scathing satire, great journalism and non-fiction, all in comics form, the best medium.” Matt added, “The Nib will be available pretty much everywhere you are. There’s a daily newsletter to read our comics in your inbox, plus, we’ll be publishing on every platform and experimenting with ambitious long-form, gifs, animation and even print products physically made  IRL.”

Adam Pincus, Executive Vice President Programming & Content for First Look Media, said, “We’re so glad to be working with Matt and to relaunch The Nib. There’s seemingly no end to great material for political satire. Matt and his cadre of cartoonists contribute an original take on the issues our day, and they do it with creativity and humor – we need it.” Adam added, “We’re planning big things with Matt in terms of new formats and new directions for The  Nib.”

The Nib activation at Snyderman-Works Galleries was produced by Brooklyn based creative agency, Doubleday & Cartwright, in partnership with Matt Bors and First Look  Media.

First Look Media is a new-model media company devoted to supporting independent voices across all platforms, from investigative journalism and documentary filmmaking to smart, provocative entertainment. Launched in 2013 by eBay founder and philanthropist Pierre Omidyar with the belief that independent perspectives are vital to a vibrant culture and thriving democracy. First Look operates as both a studio and digital media  company.