By NTU, Special for USDR. 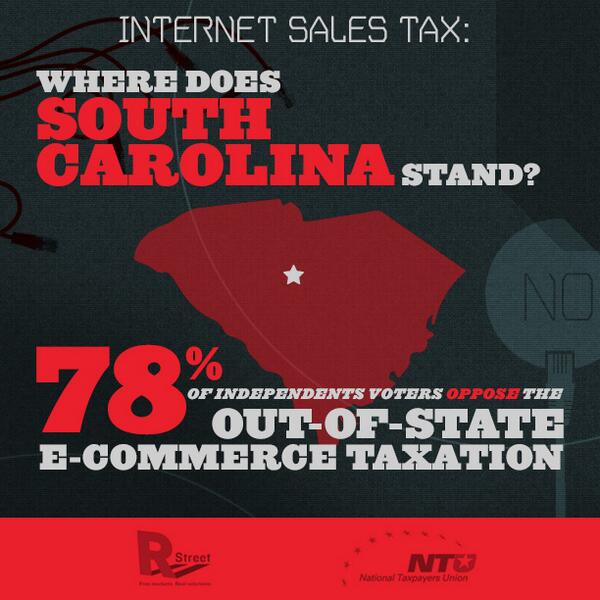 When it comes to a federal law allowing out-of-state tax collectors to reach into the pockets of Texass online merchants, by a 58-32 percent margin Lone Star State voters have a resounding and simple answer: No! Thats just one of several findings from a statewide poll released today by National Taxpayers Union and R Street Institute.
In the survey of likely 2014 general election voters in Texas, strong majorities across many ideological and partisan persuasions also indicated their belief that the Internet should remain as free from regulation and taxation as possible (by a staggering 57-point margin). One of the most lopsided results concerned federal legislation in Congress called the Marketplace Fairness Act  when told (factually) the plan would allow tax enforcement agents from one state to collect taxes from online retailers based in a different state, 73 percent of respondents were opposed with just 17 percent in favor.
Texans are extraordinarily proud of their state, so it should be no surprise that when it comes to Internet tax schemes like the Marketplace Fairness Act, they overwhelmingly believe that Texas e-retailers shouldnt be used to plug the budget gaps of other states, said Andrew Moylan, Executive Director and Senior Fellow at the R Street Institute. While Texas conservatives are strongly against such a law, its striking that opposition crosses political divides as independents and Democrats join them in forcefully rejecting new state tax enforcement powers over the Internet. This puts Senators Cornyn and Cruz  on the side of huge majorities of their constituents.
Our poll is designed to explore the specific  and sophisticated  opinions of Texas voters on this critical issue, said Brandon Arnold, Vice President of Government Affairs of National Taxpayers Union. Texas politicians of all persuasions and philosophies should take note of the results and listen to voters, not some outspoken Austin and Washington special interests. Any candidate who had numbers like this Internet tax collection scheme would have to seriously reconsider his or her political future.
A statewide survey of 400 likely voters in Texas was conducted June 3-4, 2014 by live telephone interviewing.  Thirty percent of the interviews were conducted using a cell phone sample.  The margin of error is ±4.9% at the 95% confidence level.
For more information, visit http://donttaxtheinter.net/texas.
National Taxpayers Union (NTU), The Voice of Americas Taxpayers, was founded in 1969 to work for lower taxes, limited government, and economic freedom at all levels.  The citizen group has 362,000 members nationwide and more than 23,000 members in Texas.
The R Street Institute is a non-profit, non-partisan, public policy research organization (think tank). Its mission is to engage in policy research and outreach to promote free markets and limited, effective government.
All opinions expressed on USDR are those of the author and not necessarily those of US Daily Review.