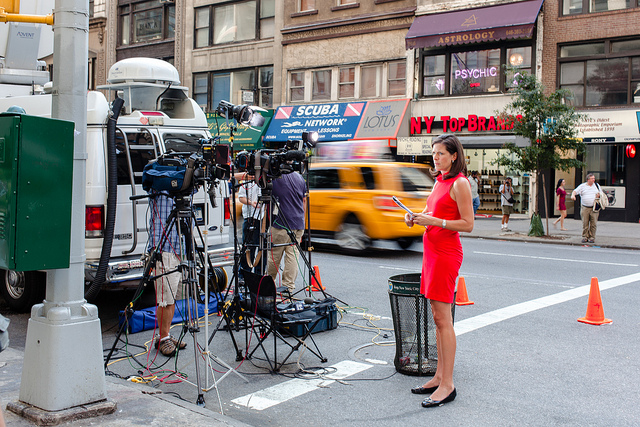 By April Dye, Contributor for USDR

I watch the news. I watch it now more than I ever have as I have gotten older and began paying more attention to what is going on in this world.

The news used to be bipartisan. It used to report the news, not make it.

I first noticed the ridiculousness of some news stories during a massive coverage of an airplane crash. I was out of town in a hotel room so I had the news on while eating breakfast. It was showing updates and repeats of the story on the local news.

There was a reporter there who was interviewing a family member of a victim in the crash. This is the question they asked, “What are you feeling right now?”

Are you kidding me? They just lost a family member and you are asking them how they are feeling.

Soon I started paying attention to interviews. Whether it was an athlete or coach losing a game, a family member in a tragedy or the victim of a horrible crime, these were the types of questions they are asking. It seemed as though they want to get a sound bite that they can play over and over again with no regard for the feelings of the person.

The news crew plant themselves at any and every breaking news stories. It is humorous to me when they stand out in a storm to show us how rainy and windy it is. But it has become very dangerous in certain situations and I feel they are making matters worse.

In our society today, everyone wants their 15 min of fame. So when the news crews stand out with their lights and cameras during stories like in Ferguson, MI, they are only making matters worse. Some of these rioters or citizens who aren’t there to be civil enjoy the attention and chaos and the possibility of themselves or something they do might be caught on film.

Why is the television crews not packing up and leaving after their curfew? Why do they feel they don’t have to obey the law? If the crew is still there then why would the people leave? They might “miss” something.

And there is the answer. The news crews don’t want to miss anything. They might catch something that another news crew won’t get. They might get a scoop. They aren’t helping anyone and instead making the chaos and agitators more aggressive.

Protesting is one thing but looters should not be getting all this coverage. They are behaving in criminal acts and the news is giving them bravado.

With this constant coverage people from all over the country are coming in not to help but to add to the chaos. I know that with the 24 hour news stations that we have they need to fill time. I just wish they would use better judgment and actually think about what their presence is doing.

The news should go back to informing the public of news stories and quit being commentators to the chaos.