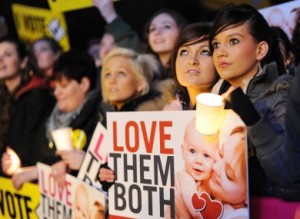 Video-Several pro-life leaders  demanded justice and burial for the bodies of 45 babies found in convicted murderer Kermit Gosnell’s Philadelphia abortion clinic. They organized a prayer vigil outside the Philadelphia Medical Examiner’s Office, and promised to risk arrest when the office barred its doors to their inquiries.
The Medical Examiner’s Office, which they say had agreed to meet with them just hours before, locked its doors and called the police as they approached.
Fr. Frank Pavone told MRC, “we’re doing two things: we’re asking ‘Why not?’ and, ‘What do you intend to do with these bodies?’ The public has the right to know where these bodies are, what’s going to be done with them.”
Students for Life’s Kristan Hawkins excoriated the office, telling the MRC, “We’re here as citizens asking the city to let us bury these babies in the proper way.” This is the city of Philadelphia wanting to forget the ugly horrors of the Kermit Gosnell trial,” Hawkins said.
See video in full post.