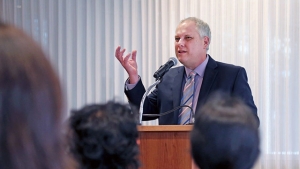 James Hartley, professor of economics at Mount Holyoke College, says his lifelong love of politics is for its drama, and the importance of it in the lives of everyday people. In an interview with Mount Holyoke Communications, he said that people feel alienated by established structures of power and democracy, and class divisions that have grown deeper, not just along economic lines but along cultural and social boundaries as  well.

“Economics, politics, culture, and society are much more intertwined than people usually think,” said Hartley. “There is now a sharp divide in America. On the one side there are the elites, which includes everyone who is reading this interview. These are the academic, media, political, and business types. On the other side there is the other America, the people who do not work in high-status occupations. These two groups rarely interact; they live in different neighborhoods, they eat at different restaurants, watch different TV shows and movies, engage in different recreational activities and so  on.”

Hartley went on to weigh in on what he calls “the Trump  phenomenon.”

“Trump is speaking to that other America, that set of Americans who are tired of the elites looking down on them and telling them what to think and what to feel. The other America is tired of being told they are ignorant racists and sexists clinging to God and guns. The other America doesn’t want more government programs to regulate every aspect of their lives,” he  said.

The Brexit vote belied a similar divide, he said: “Lots of citizens of Great Britain are tired of the academic, media, government, and business elites making decisions from afar and sneering at everyone who disagrees with them. ‘We Want Our Country Back’ sounds a lot like ‘Make America Great  Again.'”