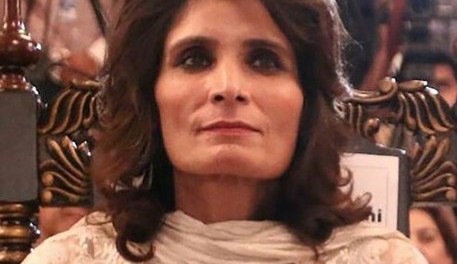 Andleeb Abbas, one of Pakistan’s most prominent women in the movement for political reform and democratization, will make an official visit to the United States from January 15-31, 2017. The Washington/New York/Boston portion of her itinerary will include meetings with the incoming administration, leading Democratic and Republican elected officials and key staffers, civil society leaders, student groups, and internationally-focused policy  centers.

Ms. Abbas, a core committee member of Pakistan Tehreek-e-Insaf (PTI), advises Chairman Imran Khan on major issues including employment, education, and women’s empowerment. She has also served as PTI’s Communications Director for Punjab, and has been a key member of the movement against corruption that PTI has initiated against the ruling  government.

On November 1, en route to a meeting with Khan at his Islamabad home, Ms. Abbas was arrested and detained without charge by the police, who assaulted and aimed rifle fire at her despite the presence of video cameras. The ordeal has deepened her commitment to exposing the corruption of the current regime and to advocating for respect for human rights under Pakistan’s constitution. She says: “If the government is willing to fire bullets at a well-known public figure like me—with cameras rolling—it says a great deal about what they are willing to do to the many powerless people who try to oppose their  abuses.”

Ms. Abbas’ United States tour will include a press conference where that video footage will be  screened:

She will be calling for greater attention on the part of US and other Western nations to the diversion of millions of dollars of foreign aid flows to Pakistan. “Aid must be conditioned upon serious democratic reforms and respect for human rights,” Ms. Abbas said. “The citizens of the United States and their elected officials need to understand the true nature of the regime their taxpayer money is perpetuating—and also understand that they have true democratic partners with whom they can work in my  country.”