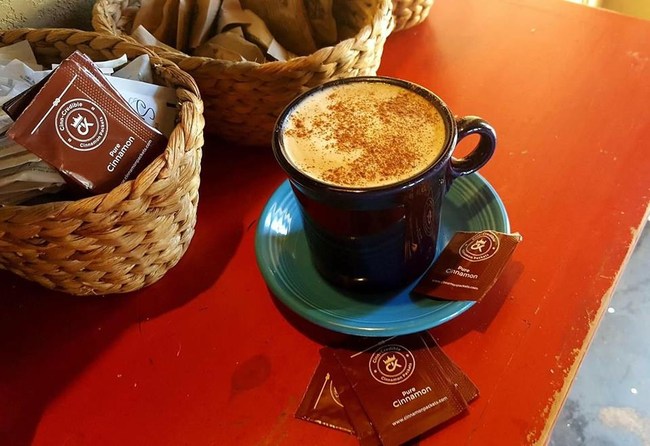 By Cinn-Credible, Special for  USDR

Cinnamon has long been known to have numerous health benefits, from combating diabetes to promoting weight loss. But for health-conscious soldiers currently fighting in Afghanistan, cinnamon is near impossible to get ahold of. Constant patrols and fire missions keep soldiers on the go, often for weeks at a time, and remote outposts have little means of receiving mail. These soldiers needed a supply of fresh and convenient cinnamon – if only to provide a touch of home with their morning cup of joe, or to sweeten the military oatmeal provided in chow tents. That’s where Cinn-Credible stepped  in.

Developed by soldiers in Afghanistan, Cinn-Credible Cinnamon Packets provide a single serving of cinnamon – just like sugar packets, but with cinnamon. It’s so simple; it’s a wonder no one has done it  before!

Now that the weather across the US is starting to turn cold, these soldiers want to offer you their battle-tested product: cinnamon packets that offer the perfect solution for cinnamon enthusiasts on the go, and for coffee shops and restaurants everywhere who’ve previously relied on large, unsanitary spice bottles that make the cinnamon lose its flavor and potency. Why settle for stale cinnamon? Soon, these cinnamon packets will be seen right next to the sugar in every coffee shop and breakfast restaurant in  town.

“There’s no reason sugar should be so readily available and cinnamon so hard to come by. After seeing the need for individual packets of cinnamon, we went on a mission to source the finest cinnamon we could – we now provide the most convenient, cleanest, and freshest cinnamon available!” says co-founder Will  Atkins.

Cinn-Credible was founded in 2016 by the power couple of Will and Katrina Atkins – locally known as the King and Queen of Cinnamon. Will is an Air Force veteran, and Katrina is getting her Doctorate in Education. Based in Tampa, Florida, the initial idea for Cinn-Credible came from the front lines of Afghanistan after health-conscious soldiers found that individually sized packages of cinnamon were impossible to order. After months of testing and development, Cinn-Credible is now a quality product ready for large-scale  production.

To take pre-orders, Cinn-Credible has launched a Kickstarter campaign, where until January 15, 2017, backers can get great deals on packets ranging from smaller batches to  wholesale.