Mark Fortier: Why is it so important that every western citizen understand the Chinese worldview?

Tom Doctoroff:  For the first time since the 17th century, the world will not be dominated by a single cultural orientation.  The rise of the East, and China in particular, heralds a multicultural global society that will affect many things, from how business deals are signed and which product categories boom to how macro-economic policies are coordinated and peace is maintained around the world.  Westerners, and Americans in particular, are raised with an unshakeable belief in the moral truth of a value system that encompasses representative democracy and universal human rights.  Our cultural absolutism blinds us to the uncomfortable fact that the Chinese do not necessarily share these views.  To establish effective partnerships, on both diplomatic and corporate levels, we need to convey sensitivity to motivations that are profoundly different from our own.

MF: What are the biggest misconceptions most westerners have about the Chinese?

TD: Most of us believe that as China becomes modern and internationalized, they also become like us.  Superficially, they do.  Shanghai’s nightlife thumps to the beat of hip hop.  And American television shows are all the rage.    But the relationship between individuals and society, rooted in twin pillars of obligation to family and the nation, remain unaffected.  In China, the basic productive unit of society remains the clan, not the individual.  Western individualism is an increasingly alluring idea, like Eve’s apple.  It’s succulent and juicy, but if you bite into it, you get banished to the Land of Outcasts.  The red line of overt rebellion must never be crossed.  The Chinese want to move forward by mastery of convention.

MF: Should America be worried about China’s rise as the next great superpower? 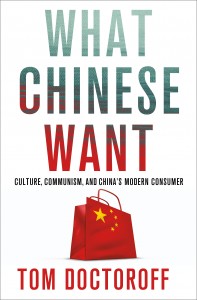 TD: The only thing we have to fear is fear itself.  China will not be a threat unless we perceive it to be.  The Chinese and their government fully understand that further economic progress relies on the complicity of other nations.  Furthermore, they have assiduously integrated themselves into an institution-based global order because that order serves their interests.  Recent “provocations” by China’s military – for example, outlandish claims in the South China sea and overheated reaction to American arms sales to Taiwan – feel offensive but, to Chinese, are defensive.  Their greatest fear, a third rail of paranoia, remains territorial disintegration, a fate that would stoke a latent “us versus them” undercurrent, one that always threatens to upset the global apple cart.   China will relentlessly advance its interests.  But technocratic mandarins in Beijing are very good at cost-benefit equations.  And it’s not in China’s interest to have the global community gang up on them.

MF: How are the Chinese responding to the recent FoxConn scandal and efforts to address labor abuse?

TD: Predictably.  The propaganda machine is going all out to reinforce that (a) multinational companies have gaps in protecting workers rights, just as much as local enterprises do and (b) the central government, given its patriarchic role to advance the welfare of the masses, is working hard to bring foreign entities into line.  It’s important to note that, over the past ten years, workers’ conditions in both local and multinational enterprises have improved dramatically.  And pay has risen across the board, in tandem with the government’s stating intention of rebalancing the economy towards domestic consumption and away from capital investment.

MF: Could the Internet cause the next Arab Spring uprising in China?

TD: No, it couldn’t.  The Chinese use the Internet to voice discontent but will stop short of open revolt.  The Chinese, more than anything else, fear instability.  China’s moral universe is relativistic.  The only absolute “truth” is that stability is sublime and chaos is evil.  Stability is the platform on which progress is constructed and, despite its flaws and unreformed ways, the central government has street cred because broad-based economic growth has continued.  Although the wealth gap in China is widening, incomes at all levels continue to rise.  To the Chinese, “democracy” means a responsive government, not a representative one.  If the government improves transparency and, in the long run, reforms the Party from within by implementing institutionalized checks and balances, the people will continue to (grudgingly) accept Party’s top down, command and control modus operandi.

MF: Why do the Chinese seem to accept censorship and piracy?

TD:  Censorship and piracy are different questions.  Censorship is tolerated for a couple reasons.  First, the people, broadly speaking, expect the government the “manage” information, as they manage everything else, to keep society stable.  Most Chinese believe the body politic is too immature for freewheeling debate and, to be fair, the boundaries of what can be discussed both in private and public domains has expanded significantly over the past several years.  Second, the Internet, while monitored by 50,000 net police, provides a platform of self-expression and access to information that didn’t exist a decade ago.  So, the Chinese – yes, unprotected by nonexistent first amendment rights — are not gagged and bound.

Piracy is accepted because intellectual property rights are inconsistent with traditional cultural values.  There is a saying of unknown origin: “To steal a book is an elegant offense.”  Only the imperial court had the right to define and disseminate “truth.”  Civil society – that is, institutions designed to impartially protect the economic and political interests of individuals – is a manifestation of our worldview, not China’s.  Of course, as the country crawls itself up value chains, it will acknowledge the pragmatic value of IP protection.  But enforcement will always be patchy because the driving force of reform is hard cash, not soft “rights.”

TD:  The relationship between individual and society is profoundly different in China versus the West.  In China, a Confucian society, the individual has never existed independent of his obligations and responsibilities to others.  External endorsement has always been the fundamental motivation of behavior.  More subtly, there is a tension between regimentation (conforming to the hierarchy) and ambition (climbing the hierarchy).  In modern China, egos are huge, but individual identities – who I am, what I really want – are weak.   The individual is not the basic productive unit of society.  This is the basic difference between China and the West:  We are encouraged to “know ourselves;” the Chinese are not.   Psychologists are taboo.

MF:  In what ways does the Chinese worldview influence consumer choices?

TD:  In the PRC, there is a golden rule of marketing:  In order to charge a price premium, public consumption must be dramatized.  That’s why certain categories – for example, cars and luxury goods – are growing so quickly, despite extremely high out-of-pocket costs.  (The average first-time auto buyer spends over 100% of yearly income on a car, versus 30%-40% in Europe and America.)  It also explains why certain companies have succeeded by changing their business models to conform to this rule before landing on the mainland.  Starbucks are not oases of urban retreat; they are gathering sites for new generation professionals.  Haagen Dazs wins with fancy ice cream parlors, not in-home consumption.  No one pays $5 to enjoy a half pint of ice cream while watching (illegal) DVDs in the living room.  Product benefits are externalized; brands are a means to an end.

MF:  Is China’s controversial currency policy influenced by their worldview?

TD:  Chinese cherish stability.  “Breakthrough” provokes anxiety. Leaders fear abrupt currency appreciation will destabilize the export sector and throw millions of workers out of jobs before the system has had time absorb excess labor.  The yuan will appreciate but, to Westerners, the pace will feel agonizingly slow.

MF:  What should westerners do differently when we engage with China as citizens, businessmen or marketers?

TD:  In a dangerous world, trust must be earned.  Westerners generally assume things are “safe.”  In China, we have to bend over backwards to define win-win objectives.   Fortunately, the Chinese are also pragmatic.  Once trust is established, barriers fall, and both sides can get down to business.

Tom Doctoroff is the Northeast Asia Area Director and Greater China CEO for J. Walter Thompson, the author of Billions, and a leading authority on marketing in China and Chinese consumer culture, with fourteen years of experience in mainland China. He has appeared regularly on CNBC, NBC,Bloomberg, and National Public Radio and is frequently featured in publications ranging from the Financial Times and Businessweek to The Wall Street Journal and The New York Times.  He is also a columnist for the China Economic Review and the Chinese magazine Global Entrepreneur.  Doctoroff is the recipient of the Magnolia Government Award, the highest honor given by the Shanghai municipal government to expatriates, and was selected to be an official torchbearer for the Beijing 2008 Olympics.