On a recent road trip in a car with my mom we covered 2000+ miles. We discussed everything from politics, religion, good or bad memories, our upcoming vacation, cars, planes, and trains.  In one of the cars, planes, and trains chats Mom asked many questions about changing gears and why it was important and how the power from the engine translates to power to the road.  Then she asked me a question that has plagued me for some time.  She asked, “Have cars always been the same?”   She asked this after I told her that the diesel engine in a train actually spins a huge electric generator that powers electric motors on the axles of the train.  Then she posed the question, “Why don’t semi-trucks use that same method?” 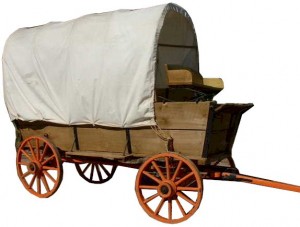 It may not be something we all think about often, but it is worth looking into. Why are we still driving around in vehicles that are laid out (engine-transmission-driving wheels) much like the first mass produced vehicles?  We are driving very fancy covered wagons.  We have a horse, the engine pulling us along the road; we have to stop and feed it once in a while.  You get the picture.

So why haven’t we invented a new wheel as it were?  What can we do differently?  Has engineering hit its pinnacle of design and this – the engine driving the wheels – is what we are to always use to get us to and from anywhere?  There are modern marvels of this covered wagon approach, like the Bugatti Veyron for instance.   This car has a climate controlled interior, the ability to travel long distances in a safe and controlled manner, yet it has 1001 horsepower and has a physics defying top speed of 252+ mph.  So you would think, well, we have arrived at where we are going to be in the covered wagon mode of transport.

But what if instead of wagons, the first mode of transport way back eons ago was a motorized wagon with no horse and no ropes to guide the wagon?  What if the first transport was a Ford Model A?  I don’t know if we would now be driving bubble cars with wings or we would just teleport everywhere, but what I do know is – what we have is good. We have an abundant source of fuel to propel our modern wagons, in all forms of fossil fuels.  The debate of greenhouse gases aside, it’s a good way to get around.  I am just wondering what the next covered wagon will be…hopefully I beat everyone to the idea so my great, great grandkids can squander all the company’s trillions of dollars and sink the business, and then get bailed out by some government hero.