The journalism community learned today about the passing of one of its colleagues, Helen Thomas.  Thomas was controversial from the beginning of her career as one of the first females to cover major media stories (including the White House, starting with John F. Kennedy). She was a pioneer in the true sense of the word.  She was also controversial for having no problem taking sides on political issues and showing her strong liberal leanings. Earlier in her career, this was subtle, with time her bias became all the more obvious.

Still, she was respected and admired by many in journalism. 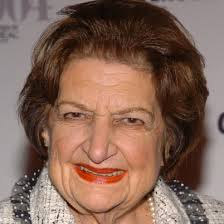 As President Obama said in his short statement, “Helen was a true pioneer, opening doors and breaking down barriers for generations of women in journalism. She covered every White House since President Kennedy’s, and during that time she never failed to keep presidents – myself included – on their toes. What made Helen the ‘Dean of the White House Press Corps’ was not just the length of her tenure, but her fierce belief that our democracy works best when we ask tough questions and hold our leaders to account.” She was also born the same day as President Obama.

I was proud and honored to offer Helen Thomas an opportunity to pen a weekly column in my newspaper, becoming the last employer of her storied career, which she did studiously and with her usual sharp wit and acumen for over a year from January 2011 to February 2012, when her failing health forced her to stop.

It would have been nice had she been able to hear today’s kind words from the President and the organization where she’d been the first woman president while she was alive.

Her coming on board my Falls Church News-Press provided her, and many of those who remained loyal to her legacy, an opportunity to brush off the horrible spill her career took in June 2010 when she was videotaped sharply rebuking the Israeli policy of encouraging immigrants to occupy the West Bank. Taken out of context, the remarks were widely denounced as anti-Semitic, a fact she repeatedly denied. But her journalistic colleagues deserted her completely, as did President Obama, who denounced her and no doubt would have taken back if he could the birthday cupcake he shared with her in the White House press briefing room the previous August 4.

The usually spry, alert and witty 90-year-old Helen Thomas suffered a great emotional hurt, and announced her retirement immediately. But the bonds of friendship and admiration I had built with her over a decade preceding – that included carrying her syndicated column in my newspaper weekly since 2004 and her memorable visits to my office as the guest of honor at receptions –  led me to immediately contact her with an offer to write for me. My newspaper’s circulation might not be as big as what she was used to, but our online edition gave her a global audience.

We met over dinner with mutual friends to discuss it, and then in December 2010 she indicated through a third party that she’d like to do it. I called her, and her immediate reaction was, “You don’t want me. I am poison. I will be poison for you.” I convinced her that didn’t concern me. We had two wonderful, lengthy meetings after that, and she began writing for me in January 2011.

I received some minor threats, but nothing serious. On the other hand, I received great expressions of appreciation from her countless fans coming in letters, post cards, emails and phone calls. When I traveled with her to New York for an interview on CNN, she was besieged with fans and well-wishers the entire way – up, there and back. It was as if she were a rock star. Those who knew what had happened to her expressed contempt and disgust for how she was treated.

In the studios of CNN, we ran across Rosie O’Donnell, who overwhelmed Helen with hugs and loud praise as a pioneer for women. Rosie was so emphatic that it brought Helen to tears. Weeks later, they later got together for lunch.

Still, despite her writing revival, the White House press office stonewalled on providing her a new press pass, and the White House Correspondents Association refused to offer her the usual table that she’d commandeered for years since before becoming its first female president. She won a consolation prize, however, when we secured for her a press pass from the Senate Periodical Press Gallery, and it was a redemptive moment, caught on camera, when she was handed that cherished symbol of her 60-year professional career, an official D.C. press pass.

Among her many loyal supporters were past presidents and officers of the Society for Professional Journalists (SPJ) who were appalled that the board of that organization moved swiftly to strike Helen’s name from a scholarship award.

At the fall annual meeting of the SPJ in New Orleans in 2011, these supporters forced a vote on the floor of a general session to reinstate her name. A heated debate ensued, and although a close vote failed to reinstate her name, many who rushed to condemn her were shamed by having to defend caving in to political pressures.

In November 2011, some of these supporters, including past SPJ president Christine Tatum, worked with me to host a reception at the National Press Club in Washington, D.C., to honor Helen. Many of her old friends and colleagues attended, and after the formal reception was over, Helen held forth in the First Amendment Lounge telling old war stories to a large contingent of wide-eyed younger supporters.

In prepared remarks she made that night and in numerous other occasions where I was present, Helen Thomas professed to being anything but the kind of hate-filled racist she was portrayed to be. She vehemently denied being anti-Semitic, noting that, being of Lebanese descent, she was a Semite, herself. She exhibited compassion and a love of people everywhere she went. She knew me to be an openly gay newspaper owner, and it never phased her. Still, she was sharp in her professional criticism, always asking the tough questions, the toughest of all being, “But what about the truth?”

She wrote a scathing critique of her journalistic colleagues in 2006, a book entitled, “Watchdogs of Democracy? The Waning Washington Press Corps and How It Has Failed the Public.” In it, she took her White House press corps colleagues to task for failing to press President George W. Bush hard enough leading up to the invasion of Iraq.

This, it is presumed, contributed to her colleagues’ unwillingness to defend her from the unfair charges that brought her down in the summer of 2010. This spring, in an article entitled, “Journalism’s Crazy Old Aunt: Helen Thomas and Paradigm Repair” published in the Journalism and Mass Communication Quarterly, authors Elizabeth Hindman and Ryan Thomas evaluated the many editorials and op-ed denouncing Helen after the 2010 incident, and along with a number of interviews, determined that the press were not interested in the “truth” dealing with Helen Thomas, but with defending the “normative behaviors and standards of an operational paradigm that defines acceptable behavior within their profession.” Helen was relegated to status as an “maverick and errant outsider unrepresentative of mainstream journalism” who no longer “belongs.” She was portrayed as descended into eccentricity and even senility (far from the truth, as anyone would attest who knew her).

So, the shameful behavior of her colleagues “kicking her under the proverbial bus” was more for their own self-preservation – including a perpetuation of their pattern of failure to drive for the truth as Helen had pointed out – than anything Helen actually said seen in proper context.

Was she opinionated? Of course, because she’d actually ceased being an “objective” reporter in 2000 when she quit United Press International after it had been taken over by the Moonies. She came on as an opinion writer for Hearst newspapers, such that being opinionated had become her job for years, and she was clearly no fan of the Israeli West Bank policy.

It is unfortunate that now, it may take her death for the world to begin to reassess and concede Helen Thomas’ true greatness. I am glad I had the opportunity to contribute in a small way to that that brought some degree of redemption and happiness to the final years of Helen’s life.

An enlarged picture of Helen and I laughing together hangs in my office. She signed it for me, reading, “To Nick, my favorite journalist, with deep appreciation.”