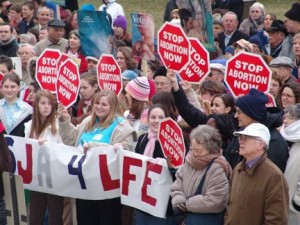 January 22, 2011 marks the 39th Anniversary of the controversial Roe vs. Wade Supreme Court decision that made abortions legal in the United States. For the first two decades, demonstrations by pro-life organizations against the case received national and even international headlines. Today, the event has not received the attention it has historically received.  This may be due to a culture who has gotten use to abortion, or a media that has never cared about it (as long as it was legal) and wants the larger population to have the day go unnoticed. In spite of this, many are turning up all over the country, as reported from many news sources:

Approximately 200 men, women and children gathered on the west steps of the Colorado State Capitol at noon today for the annual “March for Life” sponsored by the Colorado Right to Life.

The demonstration commemorates the anniversary of the Supreme Court’s 1973 Roe v. Wade decision which legalized abortion in the United States.

“Because the slaughter of innocent children is still legal. We will continue our fight for the pre-born because they are the voiceless,” said Colorado Right to Life director Susan Sutherland. “As long as abortion is legal, we’ll… (read more)

From WFAA TV in Dallas:

Thousands of abortion opponents gathered in downtown Dallas on Saturday in the state’s largest March for Life demonstration.

They carried yellow LIFE balloons representing women who had an abortion and later regretted their decision.

One prominent speaker at a rally that followed the march was Norma McCorvey, the “Jane Roe” in the Supreme Court’s historic Roe vs. Wade decision to legalize abortion in the U.S.

McCorvey had been among those who advocated for the right of women to have a choice; but she later had…(read more)

From The Republic (Indiana):

Abortion foes will march through Lincoln later this month in the annual Nebraska Walk for Life.

The event is a demonstration against Roe v. Wade, the landmark 1973 U.S. Supreme Court decision that legalized abortion.

The walk will be held Jan. 28 and is sponsored by Nebraska Right to Life. Following a brief ceremony at… (read more)

From the Huntsville Times:

Two brave women made life-changing decisions by allowing the babies they couldn’t care for to be adopted — and those decisions continue to bless her own family,  Alabama first lady Dianne Bentley told a crowd of nearly 100 Tuesday at the annual Stand for Life.

“People ask which two of our four sons are adopted, but we always say we’ve loved them for so long, we can’t remember,” Bentley said.