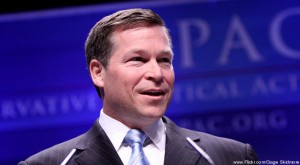 Congressman Connie Mack (FL-14) took to the House floor Wednesday evening calling out the White House for their un-American style of class warfare, and fellow Republicans for trading the cutting of unnecessary federal programs like stock futures.  Mack stated, “Pitting citizen against citizen for political gain is outrageous, and it’s wrong.”  In terms of the so-called budget offsets being discussed, Mack added, “If there are projects that can be cut, they should be cut.”

“The White House and their liberal allies in Congress and the media go on a nonstop bashing of a group of Americans who are productive and hardworking. Class warfare is as despicable as any other type of stereotyping, and pitting citizen against citizen for political gain is outrageous and it’s wrong.

“And people are disgusted with the notion that somehow the paradigm in Washington is we have to pay for a tax cut. It’s their money. Something is very wrong here, and this body is part of the problem.

“Here’s another fact: If there are projects that can be cut, they should be cut. They shouldn’t be traded like futures in the stock market. If we believe that we ought to extend the payroll tax cut, let’s extend it. Let’s stop playing games about moving money around from one program to another or keeping a bucket of projects or programs that we can save to cut at a time to bargain for something else.

“Let me say this one more time: pitting American against American is un-American and outrageous and deserves the condemnation of each and every one of us in this Congress. This is not the America we know and love. We the people deserve better.

“I yield back the balance of my time.”