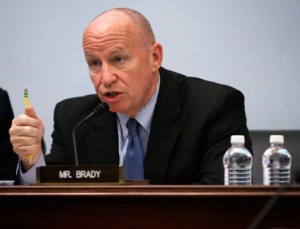 “Every day and a half in America the White House unleashes a major new regulation on America’s job creators. From energy to health care, banking to small business Main Street is under attack from its own federal government. It’s time to rein it in,” says Brady.

Brady says small, medium and major companies in his district cite the crush of new regulation as a major obstacle to hiring new workers. A recent report estimates local companies pay more than $10,000 in added regulation cost for every worker.

To slow down the White House rush on regulation, the REINS Act requires Congress to approve every new major rule that impacts the economy by $100 million or more. If Congress and the President don’t act within 70 legislative days, the rule automatically fails.

“The White House has used regulation to advance a radical agenda that couldn’t pass Congress and as a result, the Obama economy has stalled out”, adds Brady. “Commonsense tells us to get our economy back up to steam we need balanced regulations that considers how much they will hurt job creators and job seekers in America.” More than 4,000 new regulations are currently in the federal pipeline.

According to the Phoenix Center, 420 private sector jobs are lost for every $1 million in new regulatory spending and the Small Business Administration’s most recent figures put the annual cost of federal regulations at more than $1.75 trillion. This year, the burden of new regulations has already added an additional $67.4 billion on the backs of America’s employers and the proposed CAFE (Corporate Average Fuel Economy) Standards alone could add as much as $141 billion in compliance costs by 2025.

“In his State of the Union address, President Obama said [w]hen we find rules that put an unnecessary burden on businesses, we will fix them,” concluded Brady. “This bill is a strong start in the right direction.”

The Huffington Post describes the measure as a bill to give the Congress “veto power” over White House rules. In reality it is a bill to restore original power intended for the branch of government nearest to the people — the US Congress. Currently thousands of pages of new regulations are placed on businesses by bureaucrats and without Congressional approval.  This measure is designed to curtail that potential abuse of power.