On Tuesday I had the opportunity to sit and listen to two men talk about Operation Underground Railroad. Timothy Ballard, the founder of Operation Underground Railroad, left his job at Homeland Security and formed a 501c3 foundation dedicated to liberating children from sexual slavery. They have carried out multiple undercover sting operations that have freed hundreds of children and imprisoned human traffickers in countries all across the world.

Here is video of one such undercover operation. This is the takedown and in no way indicates the immense amount of labor that goes into the golden moment where they arrest these monsters living among us.

Timothy Ballard found leaving children in these unconscionable situations because they weren’t Americans simply too much to bear. He eventually left Homeland Security and collected a series of individuals together who could aid him in rescuing the lost children around the world. Nearly 2,000,000 are in sexual slavery at this very moment; and that is a sobering and heartbreaking figure.

“We go about our lives thinking we have eradicated slavery, but it’s bigger than ever,” he says. “There are more slaves today than all the slaves in 300 years of the transatlantic slave trade.” In fact, human rights organizations agree there are at least 21 million victims of human trafficking in the world today, including 2 million children. Rescuing these children has become Ballard’s mission in life—a mission he believes is inspired of the Lord. (Source)

Ballard and his team of former CIA agents, Navy Seals, businessmen and attorney generals have become a beacon of light and hope for the children being abused by monsters across the world. It is a dark and dangerous world and the Operation Underground Railroad people put their their lives on the line each time they carry out an undercover sting. 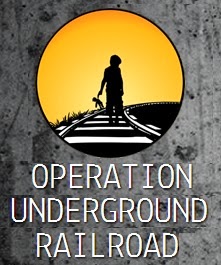 Tuesday we heard first hand account of a sting that went down in Colombia. The child sex slavery ring was being run by a former Miss Cartagena who told poor parents that their children were just too beautiful and could make an entire year’s salary in a matter of weeks with her modeling agency. The parents, wanting their children to have a better life, allowed them to go with this monster. Within 24-hours they were drugged, raped and being regularly sold as sex slaves. An O.U.R. team was in Columbia, working with the Colombian government and federal law enforcement, to carry out an undercover sting that would take place simultaneously in three different Colombian cities. There were a few hitches, but at the end of the day over fifty children were free and eight human traffickers were under arrest. I don’t know the number freed and arrested in the other cities, but sufficeth to say, O.U.R. struck a huge blow to the child sex slave industry in Colombia. The Colombian federal law enforcement officers continued to carry out raids and stings, continuing to free children and arrest more and more people.

Those who support Operation Underground Railroad are known as modern-day Abolitionists, as are Ballard and his team. This foundation is perhaps the one most worthy of supporting because it is dedicated to finding and rescuing the lost children of the world, all 2 million of them. The heinous nature of pedophiles makes them among the most evil of the dregs of society. I invite you to learn more about Operation Underground Railroad and become an Abolitionist yourself. It is a most worthy cause.

Candace E. Salima is an author, columnist, public speaker and political activist. A frequent radio guest on shows around the nation, she is valued for her viewpoint on a variety of subjects, particularly politics. She is co-owner and Vice-President of Marketing of CommuniTXT. Follow Candace on Facebook, Twitter or Google+. Learn more about her on www.candacesalima.com.