There is no telling what kind of impact yesterday’s endorsement from a coalition of Evangelical groups will have on the campaign of Rick Santorum, but there are many who believe that the split in their support in 2008 led to the election of Barack Obama.

This weekend more than 150 conservative leaders gathered in Brenham, Texas to discuss the Republican primary race and top policy goals for the next Republican Administration. 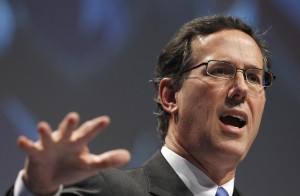 “There is unanimous agreement among conservative leaders that we can and must replace President Barack Obama in November. Today, after praying for the nation’s future, conservative leaders took the first steps in moving social conservative voters toward advancing a true conservative candidate toward the nomination. After hearing presentations from campaign surrogates and individuals’ speeches and appeals, participants cast ballots for their presidential preference.

“The agreed-to threshold for support of the group was two-thirds of those present. That threshold was surpassed on the third ballot when Rick Santorum gained 74.5 percent of the vote and Newt Gingrich received 25.5 percent. From the outset, the stated goal of the meeting was to attempt to arrive at a consensus or a clear majority of support for a single conservative candidate. That goal was achieved. While a supermajority of those attending the meeting stated support for Rick Santorum as their preference in the Republican primary, it was also made clear that conservative leaders could coalesce around any of the three presidential candidates who had strong representation at the meeting; Newt Gingrich, Rick Perry and Rick Santorum.”