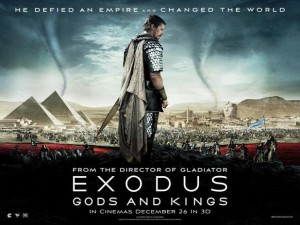 Another ambitious attempt by Hollywood to produce a scripturally based film appears to have missed the mark in a major way.

The creators of “Exodus” had the advantage of being able to observe the debacle that resulted from another offensive cinematic Biblical departure, “Noah,” which experienced much lower-than-expected domestic ticket revenue, primarily due to a general lack of support from the Christian community.

Signs that “Exodus” was going to express secular Hollywood values began arriving in the weeks prior to the movie’s release, when actor Christian Bale, who portrays Moses in the film, told a group of reporters that he thought the Old Testament prophet was “schizophrenic” and “barbaric.”

Scott himself publicly telegraphed his skepticism regarding Biblical miracles when he said that he decided to depict the events in the Moses story as natural occurrences. It is now clear that his apparent agnosticism has all but destroyed the poetic power and emotional impact inherent in DeMille’s classic version of the Old Testament recounting. Scott even managed to render dull one of the most memorable scenes in cinematic history. Although the effects in DeMille’s presentation were accomplished with the more primitive technology of the times, the rising waterscapes in the original “Ten Commandments” are viscerally more impressive than Scott’s retreating waters that result from an earthquake.

Political progressives have been critical of “Exodus: Gods and Kings” for, among other things, the film’s casting selection, which has a dearth of people of color playing lead roles. However, since the movie debuted, most of the word of mouth has zeroed in on the way in which the film has offended the entertainment sensibilities of the secular crowd with the cinematic cardinal sin of boredom.

As Stephanie Merry of the Washington Post wrote in her review, “It’s understandable that people were angry about the whitewashing of Egypt. But no aspiring actor of color should think of this as an opportunity missed so much as a bullet dodged.”

As if merely creating an affront to those who take religion seriously weren’t enough, Scott has delivered cinema with a haphazard script, superficial dialogue, inconsistent acting, and “creative license” that is seemingly intended to provoke.

Prior to the movie’s release, the film’s producer, Peter Chernin, told CBN News, “Moses is the one figure that means something to the world’s three major religions. He’s obviously critically important to Jews, Christians, but Moses to the Muslims is also a Muslim prophet.”

Chernin’s statement makes the portrayal of God in the film as a petulant child a stupefying decision. It is a blatant sign of disrespect to all of the religious traditions whose support was critical for the success of the movie. Even the critics could not help but note the inexcusable way God is depicted in “Exodus.”

Christopher Orr of The Atlantic and the aforementioned Washington Post film critic Merry both commented on the odd portrayal of the Creator.

Peter Travers of the Rolling Stone noted, “Scott departs from Scripture enough to raise hackles. For example, this Moses sees God in the person of an insolent schoolboy…”

There has been a great deal of discussion about the entertainment industry becoming more cordial to the Christian community, particularly after the eye-opening profit margins of many recent faith-based films.

Seriously insulting people of faith and otherwise alienating a broad spectrum of moviegoers, as “Exodus Gods and Kings” has succeeded in doing, is not the path to box-office heaven, but rather to the other afterlife destination.

This entry was posted in Brave New World, Left Coast Politics, Media Business, Media Culture and tagged Christian Bale, Exodus Gods and Kings, Ridley Scott. Bookmark thepermalink. Both comments and trackbacks are currently closed.
All opinions expressed on USDR are those of the author and not necessarily those of US Daily Review.