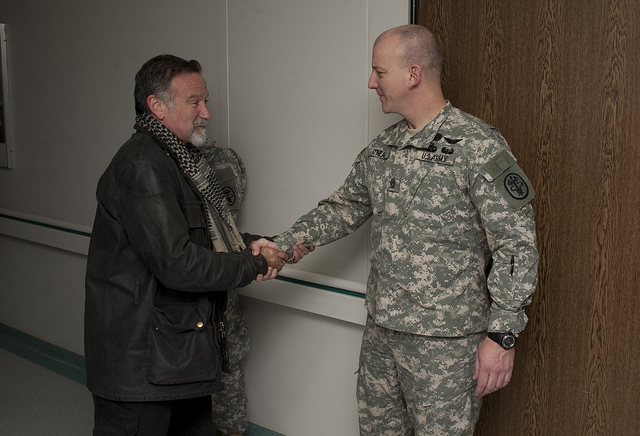 Photo by the Chairman of the Joint Chiefs of Staff

“The U.S. military and veterans who served in Iraq, Kuwait and Afghanistan, lost a true friend and supporter Monday,” said Dellinger.

Dellinger mentioned the support that Williams gave to the troops stationed in as many as 13 countries with his comedy.

“Like the great Bob Hope, Robin Williams used his special brand of comedy to entertain troops stationed in 13 countries, while traveling on multiple USO tours. By all accounts, he was warm, engaging and accessible to every service member who met him.

“The American Legion does not wish to dwell on how he died, but we want to encourage anyone who is depressed, to seek help immediately.”

Dellinger also showed concerned about suicide rate in the country.

“Last year, the United States lost one member of its military every 18 hours to suicide. Veterans and their family members who feel that they may harm themselves should call the Veterans Crisis Hotline, 1-800-273-8255, press 1. Our heartfelt condolences go out to Mr. Williams’ family and friends.”