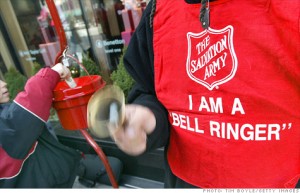 The Salvation Army raised $147.6 million through the 2011 Red Kettle Campaign, marking a new fundraising record. The new record, a 3.4 percent increase from 2010, highlights the support of American donors who gave generously despite a continued slow economy. In its 120th year, after beginning on the wharf inSan Francisco in 1891, the Red Kettle Campaign has become a Christmas tradition that utilizes volunteers to ring bells at 25,000 red kettles nationwide. In 2011, The Salvation Army expanded on the Campaign by incorporating new technologies at kettles and hosting national events to inspire giving.

“In troubling times, we are truly grateful for the generosity of the American donor to support the traditions of the campaign and help The Salvation Army carry on its Mission,” said Commissioner William Roberts, National Commander of The Salvation Army. “We have been working to expand the Red Kettle Campaign to reach new and young donors, and with continued support, we are able to meet human need in His name during the winter months and year round.”

The Walmart Foundation made a donation of $1 million to the Army as part of its effort to support hunger relief in America. Sam’s Club and The Salvation Army also partnered with Off the Field, a professional football players’ wives association, to host the fifth annual Dream Drive on December 8. Twenty pre-selected families from The Salvation Army Adopt-A-Family program in 10 cities received $1,000 in gifts from Sam’s Club for a total donation of $200,000.

The Salvation Army partnered with jcpenney for the third year to bring Christmas gifts to 63,000 children and seniors as part of the Angel Giving Tree Online at jcp.com/angel. Customers could adopt, shop and ship gifts for people in need through jcp.com.

To raise awareness during the campaign, The Salvation Army also hosted the inaugural World Record Bell Ringing Contest. Twenty-four bell ringers set out to surpass a benchmark of 36 hours of continuous ringing of a hand bell. Three bell ringers,Caleb Stokes and Leilan McNally in Indianapolis, IN and Darrell Tureskis in Springfield, IL surpassed the record and rang a bell in support for 60 hours straight.