“Government should not have unlimited power to detain citizens without a jury trial.”

By Sen. Rand Paul, Special for US Daily Review. 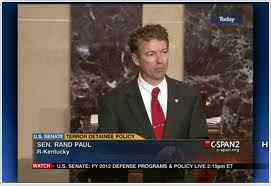 I, like most Americans, want to ensure that we punish and prevent terrorism. However, we must do so in a way that protects the rights of American citizens. In his recent column, Andrew C. McCarthy simply has his facts wrong when he claims that last week’s Senate debate on the 2012 defense-authorization bill was not about American citizens. It was.

In fact, the protection of American citizens is largely what my energies last week were directed toward. The amendments I championed – both Sen. Mark Udall’s (D., Colo.) and Sen. Dianne Feinstein’s (D., Calif.) – were specifically offered in order to protect American citizens from the indefinite detention allowed in the underlying bill. All of these amendments failed, but I was able to defeat an amendment that would have allowed American citizens to be held indefinitely even after they had been tried and found not guilty.

At no time did I argue that aliens should be given the same rights as American citizens. That was not the basis of the debate of any amendment last week. Yet Mr. McCarthy uses this strawman throughout his article. When the facts are presented clearly to Americans – that their own rights and liberties are threatened under this sort of unchecked, unconstitutional executive authority – I believe they will side with keeping their liberty.

Supporters of indefinite detention believe the U.S. Supreme Court’s decision in Hamdi v. Rumsfeld supports their view. But while the court in Hamdi held that U.S. citizens captured in combat in Afghanistan may be detained, it also held that they must, at a minimum, be granted many of the traditional aspects of constitutional due process – including a “meaningful opportunity to contest the factual basis for th[e] detention before a neutral decisionmaker,” notice of the asserted charges, an opportunity to rebut the assertions, and, most important, the right to counsel.

Also, the court’s holding pertained only to U.S. citizens captured in combat in Afghanistan. Hamdi does not address non-combatants captured in the United States. The argument in Congress this week was about whether we should expand the possibility of indefinite detention to include U.S. citizens accused of association with terrorism. This could conceivably apply to non-combatants. This could also conceivably include U.S. citizens falsely accused of association with terrorism.

If you allow the government the unlimited power to detain citizens without a jury trial, you are exposing yourself to the whim of those in power. That is a dangerous game.

The FBI publishes characteristics of people you should report as possible terrorists. The list includes the possession of “Meals Ready to Eat,” weatherproofed ammunition, and high-capacity magazines; missing fingers; brightly colored stains on clothing; paying for products in cash; and changes in hair color. I fear that such suspicions might one day be used to imprison a U.S. citizen indefinitely without trial. Just this year, the vice president referred to the Tea Party as a bunch of terrorists. So, I think we should be cautious in granting the power to detain without trial.

Nevertheless, Mr. McCarthy avers that presidents are “highly unlikely to abuse this particular power.” I am more of the Madison persuasion than Mr. McCarthy; I am worried that since governments are not constituted of angels, we must take care to restrain government with specific rules of conduct.

I am very conscious of the fact that the battlefield is not a place to read Miranda rights. In my recent opposition to detaining U.S. citizens, I specifically emphasized that my statement referred to citizens apprehended in the U.S., and not on the battlefield.

In the 1942 case Ex parte Quirin, the Court cited, and did not criticize, the government’s assertion that the one detained German alleged to be a naturalized U.S. citizen may have given up his citizenship by taking up arms against the United States. I tend to agree that taking up arms indicates a renunciation of citizenship. I have informed Sen. Lindsey Graham (R., S.C.) that I support legislation that would clarify when a citizen’s actions may cause him or her to lose citizenship, and I will work to give this debate more clarity.

It is important to remember that civil liberties need defenders. The Bush administration in Hamdi argued for indefinite detention of a U.S. citizen without even the minimum requirements of due process. Bush lost. The court held that the executive branch does not have unlimited power to indefinitely detain U.S. citizens, and that citizens must be afforded basic due-process protections.

This debate is an important one, but it must begin with facts, not inaccurate accusations. Contrary to McCarthy’s assertions, I do not argue for giving alien enemies constitutional protections. I do, however, argue for preserving U.S. citizens’ constitutional rights.

Some conservatives may choose to trust the government to always do the right thing, but I fear the day when leaders come to power who would abuse that power. Therefore, I will continue to fight for limitations on it.

Sen. Rand Paul is a Republican US Senator from Kentucky.