Senior Democrat senator, Patrick Leahy has weighed in on the demise of Egypt’s president, “The Morsi government has been a great disappointment to the people of Egypt, and to all who wish Egypt a successful transition to responsive, representative government under the rule of law.  He squandered an historic opportunity, preferring to govern by fiat rather than work with other political parties to do what is best for all Egyptians.  Egypt’s military leaders say they have no intent or desire to govern, and I hope they make good on their promise.  In the meantime, our law is clear:   U.S. aid is cut off when a democratically elected government is deposed by military coup or decree.  As we work on the new budget, my committee also will review future aid to the Egyptian government as we wait for a clearer picture.  As the world’s oldest democracy, this is a time to reaffirm our commitment to the principle that transfers of power should be by the ballot, not by force of arms.” 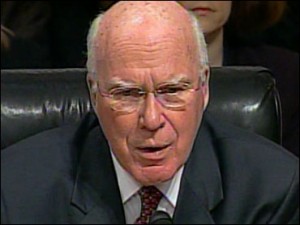 Senator Patrick Leahy (D-Vt.) chairs the budget committee for the State Department and foreign aid – the Appropriations Committee’s Subcommittee on the State Department and Foreign Operations.  He is the author of the new conditions on U.S. military aid to Egypt, enacted last year.  Sec. Clinton and Sec. Kerry earlier used their authority to waive the Leahy conditions.  To see the other provisions that relate to the situation in Egypt, in current law – the Fiscal Year 2012 State Department And Foreign Operations Appropriations Act, which was handled by the Leahy-led panel — go to this link on the Leahy website.