Special by the Heritage Foundation. 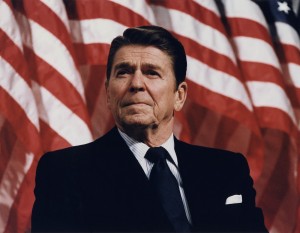 These days, everybody loves Reagan. It’s not just the 8 GOP candidates who are trying to out-Reagan each other on the campaign trail, liberals too—including President Obama—have developed a fondness for the Gipper (or at least their reconstituted version of Reagan).

Most attempts to claim Reagan’s mantle have focused on domestic policy. But Reagan did not only overcome malaiseat home and launch the longest uninterrupted peacetime economic expansion in the 20th century. He also reinvigorated American foreign policy, strengthened the military and won the Cold War.

With the presidential debate on foreign policy and national security in just two weeks, Heritage has just published aninsightful essay by Robert Kaufman which draws out the six enduring principles of Reagan’s foreign policy that should guide the thinking of prudent statesmen—on the Left and the Right:

2. A strong defense is the best deterrent.
The greatest dangers to the United States typically do not arise from vigilance or the arrogance of American power, but from unpreparedness or an excessive reluctance to fight. Retreat, retrenchment, and disarmament are historically a recipe for disaster. Consequently, the United States should strive for what Reagan’s hero Winston Churchill called “overwhelming power.” This posture will deter most aggressors most of the time and, when even the best deterrent sometimes fails, will defeat them at the lowest possible cost and risk.

3. Regime types matter.
A prudent foreign policy is attentive to the types of regimes and their ideologies when discerning friends, foes, opportunities, and perils. Reagan distinguished sharply between stable, liberal, democratic regimes on one hand and totalitarian regimes, often animated by messianic, malevolent ideology, on the other. He rightly considered the former to be more reliable allies.

4. Think geopolitically.
A prudent foreign policy considers threats, interests, and opportunities based on the imperatives of world politics rather than vague notions of cosmic justice. Since resources are finite, even a nation as powerful as the United States must prioritize wisely, without losing sight of its principles. For his entire political life, Ronald Reagan assailed isolationism, declinism, global retrenchment, American withdrawal, and the fallacy of moral equivalence, while also recoiling at the idea of exporting democracy the world over.

5. Embrace American exceptionalism.
A successful foreign policy depends on a long-term strategy that combines economic prosperity at home, robust American military power, and the vitality of the American way of life. President Reagan restored American preeminence by unleashing private enterprise, deregulating the economy, lowering taxes, limiting the growth of government, spurring innovation in the private sector, completing a major military buildup, and unabashedly asserting American ideals and self-interest in a way that clearly distinguished between freedom’s friends and foes.

6. Different times call for different strategies.
The mark of prudential statesmanship is the capacity to discern when changing times require different measures to achieve the same goals. As Reagan frequently observed, the United States could prudently pursue a policy of armed neutrality early in its history; yet the conditions the United States faced in the 20th century called for a more vigilant, interventionist, foreign policy. Even before World War II, Reagan opposed the policy of appeasement. During the Cold War while working to contain the Soviet Union, Reagan would prudently adjust his tactics (though not his goals) and take opportunities to engage Gorbachev.

In short, Reagan’s foreign policy incorporates the principles of the Founding without slighting the perennial imperatives of power and geopolitics. Looking to the 21st century, a neo-Reaganite grand strategy offers the surest guide for restoring and sustaining American greatness.