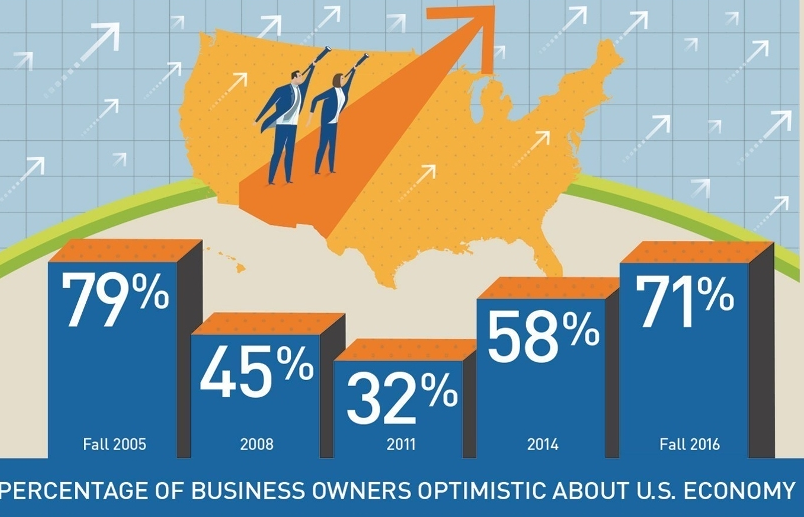 Owners of small and mid-sized businesses are upbeat about the U.S. economy amid steady expectations for their sales and hiring during the next six months, according to the latest PNC Economic Outlook Survey  findings.

Asked what term best describes their feelings about the business climate during the next six months, “hope” was chosen by 55 percent. This compares to 16 percent for “enthusiasm.” On the negative side, 11 percent chose “fear” and 4 percent picked  “despair.”

Half (51 percent) expect their sales to increase during the next six months and 47 percent say profits will rise – consistent with the past two  surveys.

At the same time, 22 percent expect to hire new full-time employees compared to 24 percent in the spring. Most (67 percent) will maintain the same number of full-time workers while only 8 percent will reduce  staff.

“The glass for small business owners appears half full instead of half empty, but they aren’t ready to buy a round for everyone,” said Stuart Hoffman, PNC’s chief economist. “We expect to see moderate economic growth for the rest of this year with enough improvement for a federal funds rate increase at the Federal Open Market Committee’s meeting in  December.”

When asked about the presidential election, business owners are dissatisfied. Two-thirds (65 percent) say they are not satisfied with how Hillary Clinton and Donald Trump are addressing the issues most important to them as business owners, a substantial increase from 53 percent in the  spring.

The PNC Financial Services Group, Inc. (NYSE: PNC) is one of the largest diversified financial services institutions in the United States, organized around its customers and communities for strong relationships and local delivery of retail and business banking; residential mortgage banking; specialized services for corporations and government entities, including corporate banking, real estate finance and asset-based lending; wealth management and asset management. For information about PNC, visit  www.pnc.com.

Methodology
The PNC Economic Outlook survey was conducted between July 21 to Sept. 11, 2016, by telephone within the United Statesamong 1,867 owners or senior decision-makers of small and mid-sized businesses with annual revenues of $100,000 to $250 million. The results given in this release are based on interviews with 502 businesses nationally, while the remaining interviews were conducted among businesses within the states of Alabama, Florida, Georgia, Illinois, Indiana, Michigan, North Carolina,Ohio and Pennsylvania plus Washington, D.C. Sampling error for the national results is +/- 4.4 percent at the 95 percent confidence level. The survey was conducted by Artemis Strategy Group (www.ArtemisSG.com), a communications strategy research firm specializing in brand positioning and policy issues. The firm, headquartered in Washington D.C., provides communications research and consulting to a range of public and private sector  clients.

This report has been prepared for general informational purposes only and is not intended as specific advice or recommendations. Information has been gathered from third party sources and has not been independently verified or accepted by The PNC Financial Services Group, Inc. PNC makes no representations or warranties as to the accuracy or completeness of the information, assumptions, analyses or conclusions presented in the report. PNC cannot be held responsible for any errors or misrepresentations contained in the report or in the information gathered from third party sources. Any reliance upon the information provided in the report is solely and exclusively at your own  risk.