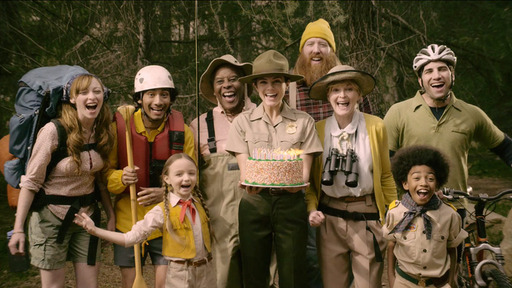 Smokey Bear, one of the most well-known icons in advertising history, is starring in a new round of public service advertisements (PSAs) to celebrate his 70th birthday and further his famous message, “Only You Can Prevent Wildfires.” The Ad Council, the U.S. Forest Service and the National Association of State Foresters (NASF) are announcing the new television, radio, print, outdoor and digital PSAs in advance of Smokey Bear’s birthday on August 9. Created pro bono by FCB West, the campaign features Smokey Bear awarding “Bear Hugs” for safe fire practices and directs audiences to visit www.SmokeyBear.com.
First launched in 1944, the Wildfire Prevention campaign is the longest running and one of the most successful PSA campaigns in American history. Over the past seven decades, the campaign has received more than $1.4 billion in donated time and space from media companies. Awareness levels have also remained high, with 96 percent of the U.S. adult population recognizing Smokey Bear and 70 percent being able to recall Smokey’s tagline without any prompting, according to the Ad Council’s consumer tracking surveys. Most importantly, the average number of acres lost annually to wildfire has decreased from 22 million in 1944 to an average of 6.7 million today.“Few advertising icons have become as much a part of the American vernacular as Smokey Bear,” said Peggy Conlon, president & CEO of the Ad Council. “Smokey’s persistent popularity from generation to generation is not only a testament to the quality of work done on his behalf pro bono by FCB, but also ensures that his legacy will be one that results in continued impact in the area of wildfire prevention.”

Created pro bono by newly rebranded ad agency FCB West, the same volunteer agency that has created work for the campaign since 1944, the new television, radio, print, outdoor and digital PSAs continue the “Smokey Bear Hug” where, in acknowledgement of using the proper actions to prevent wildfires, Smokey rewards his followers with a hug. In return, outdoor–loving individuals across the nation are shown reciprocating with a birthday bear hug in honor of his 70 years of service. Audiences are encouraged to join in by posting their own #SmokeyBearHug online.

“Smokey has a long legacy as a wildfire prevention icon,” said Eric Springer, EVP, chief creative officer of FCB West. “We are honored to help celebrate his 70th birthday through these new spots and continue to spread his message.”

The PSAs direct viewers to www.SmokeyBear.com where they can sign a wildfire prevention pledge, learn safety tips like how to properly build and put out campfires, and access tons of Smokey content from past to present. Smokey Bear is also continuing to encourage young adults to be proactive in preventing wildfires through his social media channels, which include over 180,000 Facebook fans, 22,000 Twitter followers, and over 620,000 views onYouTube.

Although progress has been made, wildfires remain one of the most critical environmental issues affecting the U.S. Many Americans believe that lightning starts most wildfires. In fact, on average, nearly 9 out of 10 wildfires nationwide today are caused by people. The principle causes are careless or accidental behaviors like campfires being left unattended, debris burning on windy days, improper discarding of smoking materials or BBQ coals, and operating equipment without spark arrestors.

“Our Wildfire Prevention campaign has helped children and adults throughout the country understand their role in preventing wildfires,” said Forest Service Chief Tom Tidwell. “Smokey Bear has empowered people to make a difference; his message of personal responsibility continues to be as critical and relevant now as ever. We look forward to celebrating many more birthdays of our beloved icon.”

The Ad Council is distributing the new PSAs to more than 33,000 media outlets nationwide this month. Per the organization’s model, the PSAs will air and run in advertising time and space that is entirely donated by the media.

Smokey Bear will officially celebrate his 70th birthday on August 9, 2014, through a series of national and local events and activities to be implemented throughout the spring, summer and fall.

National Association of State Foresters
The National Association of State Foresters is comprised of the directors of forestry agencies from the fifty states, eight U.S. territories and associated states, and the District of Columbia. Through public-private partnership, NASF seeks to advance sustainable forestry, conservation, and protection of forest lands and their associated resources. As a partner with the U.S. Forest Service, State Foresters are committed to the continued delivery of Smokey Bear’s message of personal responsibility in wildfire protection.

The Ad Council
The Ad Council is a private, non-profit organization with a rich history of marshalling volunteer talent from the advertising and media industries to deliver critical messages to the American public. Having produced literally thousands of PSA campaigns addressing the most pressing social issues of the day, the Ad Council has affected, and continues to affect, tremendous positive change by raising awareness, inspiring action and saving lives. To learn more about the Ad Council and its campaigns, visit www.adcouncil.org, like us onFacebook, follow us on Twitter or view our PSAs on YouTube.

FCB
With more than 140 years of communications expertise, FCB’s worldwide network spans 150 offices in 90 countries, with over 8,000 people, and is part of the Interpublic Group of Companies (NYSE:IPG).  For more information, visitwww.fcb.com.  Follow us on Twitter and Instagram (@FCBglobal) and Facebook (FCB Global).