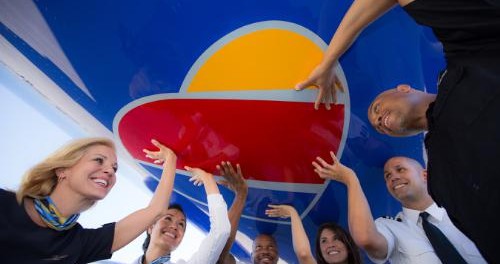 “We continuously look for ways to enhance the Customer Experience onboard our aircraft, and Community coffee hits the spot,” saidSonya Lacore, Southwest Airlines Vice President of Cabin Services. “Community Coffee Company offers a high-quality product and shares our commitment to invest in the communities where our Customers, Employees and Suppliers live and  work.”

For every pound of Community coffee served on a Southwest flight, the airline and Community Coffee Company will provide funding to the ECOM Foundation, a nonprofit organization focused on ensuring a better life for origin producers. The donations will fund educational programs to support the children, families, and farmers in Mexico where Community Coffee Company’s high-quality Arabica coffee beans are grown. Hear from some of the coffee growers who will benefit  here.

“Southwest Airlines customers will not only enjoy the rich, smooth flavor of Community® Signature Blend coffee during their flights but will be a part of giving back to the coffee growers and their families through educational support programs,” said David Belanger, President and CEO of Community Coffee Company. “Southwest and Community Coffee Company are a perfect partnership of heart and  family.”

Initially, the collaborative effort will support the opening of two satellite schools in rural Chiapas, Mexico, where residents have historically been challenged by the difficult terrain and weather conditions to reach schools in far-away towns. The schools will serve not only children, but the community at large through secondary education opportunities including advanced farming techniques for farmers and community  training.

For more information about the collaboration, visit  southwest.com/coffee.

About Community Coffee  Company
Now in its 96th year, Community Coffee Company houses the largest family-owned and operated retail coffee brand in America, and four generations of the Saurage family have operated the company since its inception. Founded in 1919, Community Coffee Company is an importer, roaster and distributor of the highest-quality premium coffees and teas, using only 100% Arabica coffee beans. For additional information, visit CommunityCoffee.com or find the brand on Facebook and  Twitter.

ABOUT SOUTHWEST AIRLINES  CO.
In its 45th year of service, Dallas-based Southwest Airlines (NYSE: LUV) continues to differentiate itself from other air carriers with exemplary Customer Service delivered by more than 49,000 Employees to more than 100 million Customers annually.  Southwest proudly operates a network of 97 destinations across the United States and seven additional countries with more than 3,900 departures a day during peak travel  season.

Based on the U.S. Department of Transportation’s most recent data, Southwest Airlines is the nation’s largest carrier in terms of originating domestic passengers boarded. The Company operates the largest fleet of Boeing aircraft in the world, the majority of which are equipped with satellite-based WiFi providing gate-to-gate connectivity.  That connectivity enables Customers to use their personal devices to view video on-demand movies and television shows, as well as nearly 20 channels of free, live TV compliments of our valued Partners. Southwest created Transfarency℠, a philosophy which treats Customers honestly and fairly, and in which low fares actually stay low. Southwest is the only major U.S. airline to offer bags fly free®  to everyone (first and second checked pieces of luggage, size and weight limits apply, some airlines may allow free checked bags on select routes or for qualified circumstances), and there are no change fees, though fare differences might apply. In 2014, the airline proudly unveiled a bold new look:  Heart.  The new aircraft livery, airport experience, and logo, showcase the dedication of Southwest Employees to connect Customers with what’s important in their  lives.

From its first flights on June 18, 1971, Southwest Airlines launched an era of unprecedented affordability in air travel described by the U.S. Department of Transportation as “The Southwest Effect,” a lowering of fares and increase in passenger traffic whenever the carrier enters new markets.  With 43 consecutive years of profitability, Southwest is one of the most honored airlines in the world, known for a triple bottom line approach that contributes to the carrier’s performance and productivity, the importance of its People and the communities they serve, and an overall commitment to efficiency and the planet. The 2014 Southwest Airlines One Report™ can be found at  SouthwestOneReport.com.

Book Southwest Airlines’ low fares online at Southwest.com or by phone at  800-I-FLY-SWA.