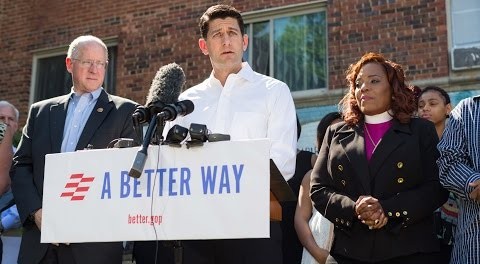 Speaker Paul Ryan was never in a close race. Some national media types wanted to make it closer than it was, but wishing does not make it so, and as the book is famously titled, Hope Is Not A Strategy.

As the landslide 85% to 15% vote tally started to become evident, the race was called for Speaker Ryan within about a half of the polls closing in Wisconsin. Later in the evening, as people waited to hear from Speaker Ryan, the Speaker gave a few brief remarks to a gathered press, and he spoke about the Republican Better Way agenda, before taking questions about Donald Trump.

“They share my desire for political leadership that is inclusive, not divisive. They look at the horizon and they look for hope, not fear.

“Most of all, they want someone who works to effectively advance our founding principles.”

“At times as uncertain as these, it is easy to resort to division, it’s simple to pray on people’s fears. The stuff sells, but it doesn’t stick. It doesn’t last. Most of all, it doesn’t work,” he said.

“Between now and November, I am committed to doing everything I can to make sure that the status quo, which isn’t good enough, is not continued, because we can do better.”

Speaker Ryan’s campaign never got bogged down by the negativity of national purists like Ann Coulter, Sarah Palin and Michelle Malkin. Instead, Paul Ryan talked only about himself, and a positive direction for America. He offered voters his typical, optimistic vision that reminds people of his mentor Jack Kemp.

In the end, the voters of the 1st Congressional District rewarded him for it.