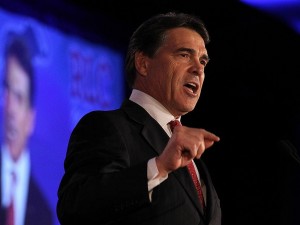 Rick Perry (R-TX) came on the scene in a flash and soon became the lightening rod of the other GOP contenders.  In no time he found himself limping along, injured by the attacks and was quickly being seen as a second tier candidate.  Needing to fight back, Perry has unveiled his “Cut, Balance and Grow” plan, which provides taxpayers with the choice of a simple, 20 percent flat tax rate, cuts federal spending, ends earmarks and includes a federal Balanced Budget Amendment.  He announced his plan at ISO Poly Films near Greenville.

The governor’s plan addresses five primary areas of reform, which include replacing the current tax code with an optional 20 percent flat tax for individuals and corporations, simplifying our regulatory system by freezing new and auditing pending regulations, fixing Social Security, Medicare and Medicaid entitlement programs, balancing the federal budget by 2020, and repealing “job-killing” federal laws like Obamacare, Dodd-Frank and parts of Sarbanes-Oxley.  This is a sweeping plan, and unlike fellow contender Herman Cain’s plan, which will definitely raise taxes on many, Perry’s plan provides an “option,” that will raise questions about how revenue neutral it is.

In his speech, Perry said “My Cut, Balance and Grow plan reorders the way they do business in Washington by reinventing the tax code and restoring our nation to fiscal health through balanced budgets and entitlement reform… Central to my plan is giving every American the option of throwing out the three million words of the current tax code and the costs of complying with that code in order to pay a 20 percent flat tax on their income.”  He went on to say that “My plan offers the kind of bold reform needed to jolt this economy out of its doldrums and renew American prosperity. This is a change election, and I offer a plan that changes the way Washington does business.”

According to Perry’s campaign, “As president, Gov. Perry will work to implement a plan that cuts taxes across all income groups, leaving more money in Americans’ pockets and encouraging greater investment in the private economy instead of federal government.”

The new tax code, featuring the 20 percent flat tax, will be simple enough to file taxes on a postcard, providing deductions for only mortgage interest, charitable giving and state and local tax payments for families earning $500,000 or less. It will also eliminate taxes on Social Security, the death tax, capital gains tax and taxes on dividends, while increasing the standard exemption for individuals and dependents to $12,500 for those earning $500,000 or less.The campaign argues that, “Overall, taxpayers will save money through lower taxes and lower tax compliance costs since the new form will be simpler.”

Regarding corporate taxes, the governor’s plan creates a tax “that is lower and fairer, closing corporate loopholes and ending special breaks for special interests.” It offers a lower rate of 20 percent, the average corporate rate among developed nations, replacing the current combined corporate tax rate of 39.2 percent, which is currently the second-highest in the world.  Obviously the 20 percent flat rate will be attractive to many businesses out there, but many making less than $200,000 a year may choose to stay right where they are tax wise.  “Having your cake and eating it too” makes for great political posturing, but it raises questions about fiscal viability. It certainly raises doubts about the “Balance” part of the proposal.

According to the Perry campaign, “Cut, Balance and Grow” also implements two major reforms that will provide incentives to corporations to invest in America again. First, it will transition to a territorial tax system on corporate income earned overseas, so companies pay the appropriate corporate tax in the country where income was earned, but aren’t taxed a second time when that income is moved back into the United States. Second, the plan provides a temporary, one-time reduced tax rate of 5.25 percent on repatriated earnings that are currently languishing overseas.

Gov. Perry noted, “My Cut, Balance and Grow plan will unleash job creation to address the current economic crisis, while generating a stable source of revenue to put America’s fiscal house in order. It provides employers and investors certainty, which is critical to getting investment capital back into the economy. In contrast, the president’s plan provides temporary tax relief, which does nothing to encourage long-term investment, because it doesn’t provide the private sector certainty. The way to stimulate the economy is not through temporary tax relief or government spending, but by stimulating private spending through permanent tax relief.”

Perry argues that the corporate flat tax plan will “bring more jobs and economic investment back to America, unleashing job creation that will remedy the current economic crisis and generate a stable source of revenue to address the nation’s record deficit.”

Perry’s Social Security proposals are very bold and might resonate, in spite of the fact that it could impact future beneficiaries. In the past, mentioning of such reforms has taken candidates out, but the current concerns about Social Security might make people more receptive.

To reform Medicare and “save it” for future generations, Gov. Perry will work with Congress on several options, including:

Like many political proposals, Perry’s plan is not heavy on specifics (for example, over coming the Medicare waste and fraud. The governor’s plan goes on to restructures Medicaid, returning control over the program and the dollars needed to administer it to the states, giving them flexibility to fix the program and control its costs.  This proposal makes considerable sense, considering that the federal approach has failed miserably and allowing the states to develop a best solution.

Gov. Perry’s plan “sets a course to a balanced federal budget by 2020.”  Voters are rightly concerned about “balance budget” proposals that don’t happen until the politician leaves office, but Perry is at it again. In his remarks, the governor noted that to “truly protect taxpayers, a Balanced Budget Amendment to the U.S. Constitution is absolutely necessary.” He pledged to “reduce spending across several agencies including the Department of Education, Department of Energy and Environmental Protection Agency, while returning greater regulatory control of those responsibilities to the states.”

Gov. Perry’s plan to balance the budget will cut federal spending to 18 percent of GDP from the current rate of about 23 percent and will reduce non-defense discretionary spending by $100 billion in the first year. Again, no specifics on what will be cut. That is left to office holders, not candidates.

Regulatory reform is also key to Gov. Perry’s plan. That reform will begin on “his first day in office,” when he will freeze all pending federal regulations and immediately begin a review of all new regulations implemented since January of 2008.  Thanks to the far reaching executive orders under the Obama administration, a Republican president will have the ability to change much of our situation on his or her own.

Finally, the governor pledged to lead the charge to eliminate the Dodd-Frank banking regulations which impede investment in our economy and block access to credit in a time when small businesses need it most. His plan also calls for the repeal of Obamacare and of the onerous Sarbanes-Oxley Section 404 regulations on small businesses.

“The future of America is too important to be left to the Washington politicians. My plan unleashes American ingenuity for a new American Century, restores the hopes and dreams of our people, renews our great promise, and entrusts the fate of this nation into the hands of our people, setting them free.”