By Graphisoft, Special for US Daily Review. 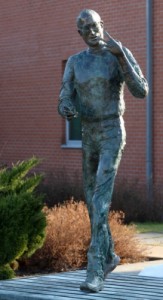 Commissioned by GRAPHISOFT Founder and Chairman of the Board, Gabor Bojar, the statue is the first in the world honoring the late founder of Apple, who passed away on October 5.  Crafted by Hungarian sculptorErno Toth, the life-like bronze statue stands near the entrance of architectural software maker GRAPHISOFT’s Budapest headquarters.

The relationship between GRAPHISOFT and Apple can be traced to the 1980’s, when Jobs came across the first version of GRAPHISOFT’s ArchiCAD software at the 1984 CeBIT in Germany.  His first impressions of the software led him to throw Apple’s support behind the development and distribution of ArchiCAD.  “Apple’s support included cash and computers at a time when GRAPHISOFT was a small company with limited resources, working within the economic and political confines of what was, at the time, communist Hungary,” Gabor Bojar said.  Apple also introduced GRAPHISOFT to its worldwide distribution network, which remains a cornerstone of the business today.  “With its attention to excellence in every detail, Graphisoft Park’s environment embodies the spirit of Steve Jobs,” Viktor Varkonyi, CEO of GRAPHISOFT said.  “I can’t think of a better place to commemorate the man and his legacy,” he continued.

About GRAPHISOFT
GRAPHISOFT® ignited the BIM revolution with ArchiCAD®, the industry first BIM software for architects. GRAPHISOFT continues to lead the industry with innovative solutions such as the revolutionary GRAPHISOFT BIM Server™, the world’s first real-time BIM collaboration environment, and the GRAPHISOFT EcoDesigner™, the world’s first fully-integrated building energy modeling application. GRAPHISOFT’s innovative solutions have fundamentally changed the way architects around the world design and collaborate.  GRAPHISOFT has been a part of the Nemetschek Group since its acquisition in 2007.

About Graphisoft Park
Graphisoft Park is the first science/technology park in Budapest, established by GRAPHISOFT in 1997 when looking for new premises. GRAPHISOFT believed that providing the world’s best architects with the world’s best software would be possible only if the company itself could operate in a first-class architectural environment.  Within a few years, several other high-tech firms rented space at the Park, attracted by its unmatched location, exceptional design, and superior services.  In addition to GRAPHISOFT, tenants include SAP, Microsoft, Servier, Canon, and over 40 other high-tech companies. The mission of the Park is to enable its tenants to attract the best talent with an inspiring calm and green environment, located directly on the banks of the Danube River. Graphisoft Park SE is a public European corporation listed on the Budapest Stock Exchange.