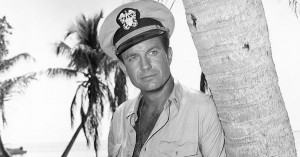 Among the Many Roles He Played, JFK in the Movie PT 109

From the New York Times:

Cliff Robertson, the ruggedly handsome actor who won an Oscar for “Charly” but found himself frozen out of jobs for almost four years after he exposed a prominent Hollywood studio boss as a forger and embezzler, died Saturday on Long Island. He was 88 and lived in Water Mill, N.Y.

His long movie career began with “Picnic” in 1955 and continued through “Spider-Man” and its two sequels in the 21st century. Also a familiar face in television dramas from the earliest days of the medium, he was consistently praised by critics, but never quite reached the top echelon of movie stardom.

Mr. Robertson, a frequent critic of the movie industry who once said he went to Hollywood only to work and never to live, blew the whistle on David Begelman, the president of Columbia Pictures, in 1977 after he discovered that Mr. Begelman had forged his name to a $10,000 studio check. Mr. Begelman was subsequently accused of embezzling more than $61,000 from the studio.

He pressed his complaint against the advice of many in Hollywood who did not want Mr. Begelman to become a liability to the movie industry. Mr. Begelman pleaded no contest to charges of grand theft and was fined $5,000 and sentenced to three years’… (read more)