It seems shocking that such could happen on the surface. Ted Cruz was outspend 5 to 1 and David Dewhurst has one of the strongest brands (thanks to personal fortune and how many times he has run for office statewide) in the state.  But inn a true Tea Party vs. establishment showdown (not to mention, David vs. Goliath), fiscally conservative candidate Ted Cruz forced establishment candidate David Dewhurst to a runoff election.  The runoff election is expected to take place in late July.

Kevin Price, Host of the Price of Business and Editor in Chief of US Daily Review has interviewed Cruz several times and said, after the win, “this is exactly what Cruz was hoping for and it is sending shock waves throughout the political establishment.” 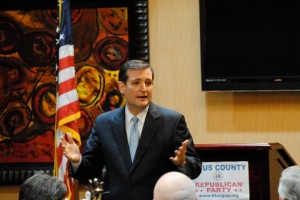 “This is an incremental, but important victory for the limited government grassroots movement in Texas.  We have helped maximize our 100,000 Texan activists’ efforts by providing materials, phone banking, and walking map technology.  The activists have risen to the challenge and run a sophisticated ground game on behalf of Ted Cruz.”

FreedomWorks for America was one of Ted Cruz’s earliest endorsements, announcing support for the constitutional conservative in June 2011. Since the endorsement, FreedomWorks for America hosted 26 “Get out the Vote” events and established 35 distribution centers across the state to distribute approximately 46,000 door hangers, 8,600 yard signs, and 7,500 bumper stickers.

Hecker continued, “Ted Cruz’s success in Texas is yet another example of a larger national movement to support fiscal conservative House and Senate candidates like Dan Liljenquist in Utah, Richard Mourdock in Indiana and Josh Mandel in Ohio. Cruz would not only be a strong addition to take back the majority in the Senate, but also to strengthen the cohort of fiscal conservatives who will take leadership on crafting serious reform and advancing pro-growth economic policy.”

The runoff could make Cruz’s position even stronger going into November because there are few that doubt that the Tea party will come out for him in July. Dewhurst, who is the establishment candidate by every measure, may not be so fortunate.