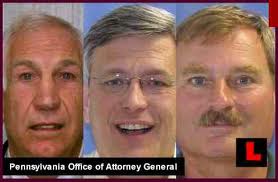 The sexual abuse scandal involving a former Penn State football coach has cost a top administrator his job and put another on indefinitly.

Athletics director Tim Curley is going on administrative leave at his request, according to a statement from the school board of trustees late Sunday. Senior vice president for business and finance Gary Schultz will step down and go back into retirement.

The two face charges they perjured themselves before a grand jury and failed to notify law enforcement authorities of child sexual abuse allegations against Jerry Sandusky, the one-time presumed successor to legendary coach Joe Paterno. Curley and Schultz are expected to turn themselves in to law enforcement in Harrisburg today. The move follows an emergency meeting of the trustees.

Also Sunday, Facebook page “Fire Graham Spanier” took aim on the school president as the specter of the scandal grew. On Saturday, Spanier had issued a statement offering strong support for Curley and Schultz.

But included in the release from the board of trustees was a statement from Spanier: “The protection of children is of paramount importance. The University will take a number of actions moving forward to increase the safety and security within our facilities and make everyone aware of the protocols in place for handling these issues.”

Penn State spokeswoman Lisa Powers said the school would pay legal fees for Curley and Schultz because they were acting as employees. Sandusky was banned from campus.

In a scandal that has rocked the university and its No. 12-ranked football program, Sandusky, 67, faces 40 abuse charges, including 21 felonies. Sandusky, released on $100,000 bail, is charged with abusing eight boys between 1994 and 2009, with some incidents said to have taken place in a Penn State athletics building. He retired from Paterno’s staff in 1999.