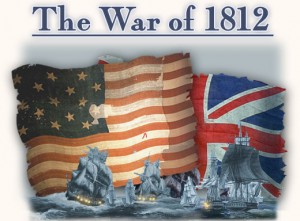 On June 18, 1812, James Madison received a declaration of war against Great Britain stating that “war be and the same is hereby declared to exist between the United Kingdom of Great Britain and Ireland and the dependencies thereof, and the United States of America and their territories; and that the President of the United States is hereby authorized to use the whole land and naval force of the United States to carry the same into effect, and to issue to private armed vessels of the United States commissions or letters of marque and general reprisal”. Thus began the War of 1812. The United States, stung by the British government’s interference in international trade, the impressment of American citizens into the British navy, the agitations of Native groups along the western frontier and the lack of compliance with the provisions of the treaty that ended the Revolutionary War, took action against arguably one of the most powerful naval and land forces of the 19th century. The next two and a half years, the war would rage across the Old Northwest Territories and along the eastern seaboard and to New Orleans and threaten the existence of Canada. The first two years of the war had many defeats. The two stunning bright spots were the Battle of Lake Erie in September of 1813 and the Battle of the Thames that followed. This war is rarely studied in school – it has serious historical significance. Of course, the question to ask is what would have happened to the United States if we lost?

As a country, we were still leery of standing armies and navies, still many with the living memories of the injustices before and during the Revolutionary War in their hearts and minds. In times of relative peace, the drawdown of our military forces meant a lack of readiness. However, in this case, our wartime fleet was sold due to the inability to afford it. The cost of maintenance of a wooden fleet simply was not in the new country’s budget. We were left with little protection of our coasts and virtually none for our merchant fleets. Impressment and harassment was a constant threat for private ships. The navy consisted of less than a dozen ships upon entering the war. The British had nearly 600 ships. Our most famous ship was the USS Constitution, “Old Ironsides”.  Cannon balls would bounce of her sides, earning the nickname. Her keep was laid in 1795 and she was launched two years later. She saw action during the Barbary Wars from 1803 – 1805 and, in two separate battles in the early months of the War of 1812, she was victorious. At age 33, Isaac Hull was given command of the USS Constitution in 1810. Hull put to sea as a young man of 14, following his father’s footsteps. Most people are astonished to learn that Oliver Hazard Perry was given command of the Great Lakes fleet at the age of 29 but already had nearly 20 years in the navy, having gone to sea at age 10 with his father. Hull simply outgunned the HMS Guerriere in August, 1812, taking down her mizzen and main masts, striking her colors by demolishing any ability to fly them. This victory was just a moral victory but an important moral victory.

In the 19th century, our government was still issuing letters of marque, allowing privateers to arm themselves and then capture enemy ships for profit. The Constitution gave Congress the power to declare and issue letters of marque. Historically, a letter of marque meant that a border could be crossed for reprisal. In this case, privateers could arm themselves in a time of war for purposes of defense and profit. The letter would spell out the rules of engagements including nationalities involved and any restrictions. A naval battle would wound a ship, not sink it, so the ship and its cargo could be towed to the closest port and the cargo sold. Once the colors were struck (taken down), it meant the battle was over. The taking of prizes was a regular and lucrative practice. A captain would place a prize crew aboard the defeated ship to take it back to port. The profits were split, the captain receiving the largest share. For the United States, the eastern seaboard was a nightmare to patrol and British war vessels could easily seize merchant ships and raid and plunder coastal communities. These raids were quite profitable for the British. According to Walter Lord, recalcitrant Americans had their homes and businesses burned to the ground for a lack of cooperation by the British commander. He sent orders along describing the perfect way in which to set a fire so it burn quickly and efficiently. Booty from these raids was taken to Bermuda until it could be sold. Even prior to the official declaration of hostilities, these raids were common enough to keep coastal residents on edge.

The War of 1812 was our first declared war for our nation. It was a foolish war to wage for many reasons but there were some good reasons to go to war. It was, in many ways, a necessary war to resolve issues between the United States and Great Britain that had been lingering from the end of the Revolutionary War. In 2012, I will submit a series of articles on the War of 1812 covering some of the topics of war, both stunning victories and spectacular defeats. Some of the events we know – the siege of Baltimore harbor and the burning of the Capitol building in Washington, DC. The naval battle on Lake Champlain and the River Raisin are not so well known. We maintain the world’s longest undefended border with our Canadian neighbors. Some of the reasons for this long-standing peace stem from the consequences and outcome of the War of 1812.