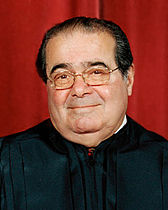 Antonin Scalia’s conservative legacy on the Supreme Court is not as great or as enduring as it could have been according to David Schultz, a Hamline University political science professor who wrote one of the first books on the former justice. Proof of that muted legacy is the fight over his successor and how it has transformed the 2016 presidential  elections.

Professor Schultz argued in his 1996 book The Jurisprudential Vision of Justice Antonin Scalia that the former justice’s so called politically neutral original intent was anything but politically neutral. “As far back as within a few years on the Supreme Court” Scalia’s rulings demonstrated a clear political bias for certain issues, outcomes, or plaintiffs, and in the 20 years since those biases did not change. Scalia’s methodology hid, perhaps not so well, a clear political agenda that only became more obvious over time,” according to Professor  Schultz.

In his book Schultz describes Scalia as seeking to create a “Post New Deal” theory of the Constitution that moved the Supreme Court away from its role established during the New Deal and through the 1960s. That role was one where the Supreme Court was deferential to congressional economic regulation, presidential power, and protective of certain types of individual rights. In many ways Scalia was successful in pushing his political-legal agenda, and his role on the Supreme Court was critical to making it a reliable force in furthering the conservative legacy and agenda of Ronald Reagan (who appointed him to the Court) well beyond his  presidency.

Schultz contends that: “Scalia’s often acerbic opinions and his refusal to compromise even with other conservative justices muted an even greater influence he could have had. Scalia’s votes pushed the court in a conservative direction but often his legal reasoning did not win over  others.”

“The intensity of the fight over Scalia’s replacement speaks to his lack of enduring influence beyond his tenure on the Supreme Court,” Schultz contends. “Both the Democrats and Republicans realize that replacing Scalia potentially undoes and reverses Scalia’s 30 year legacy and finally brings to a close his and the conservative revolution of the Reagan  era.”

Schultz who recently coauthored Presidential Swing State: Why Ten Only Matter (2015) sees the fight over Scalia’s successor as potentially a major factor influencing swing voters in the critical ten or so swing states who will decide the 2016 presidential election. “A lot can happen between now and election day and how this fight plays out among a handful of voters in a few states will determine whether it is President Obama or the next president who picks Scalia’s  successor.”