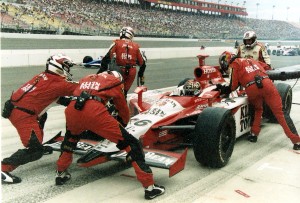 I find it odd that TV announcers, and we the audience, have a term for pre-destined crashes in a racing series. Names like “the big one”, and last Saturday’s crash certainly was. Fifteen cars traveling over 200 mph meeting in the middle of one of the worst crashes I’ve witnessed and stealing the life of two-time Indy 500 champion, Dan Wheldon.

Prior to the race Dan and other drivers voiced that they had concerns about the safety of the track. These drivers are conditioned to drive to the front of the pack, regardless of their worries – once in the car it’s win, not lose. Their cars hit 225 miles per hour in the straights – the length of a football field per second. They drive at that speed while maintaining the same distance between fellow drivers as you have from your face to the screen from which you are reading this article. Reaction times, despite being some of the best drivers in the world, are not going to do much good if something goes amiss.  I’ll put it to you this way, if one of your icons flew off of your screen right now at 55 miles per hour; you wouldn’t have enough time to do much of anything but say ‘ouch” after it hits you.

The risk of “the big one” is there; it’s always there.

It amazes me the amount of skill, and bravery these men and women show. Two hundred twenty five miles per hour inching away from each other in a pack of 34 cars and they make it seem like I could get out there and win the race. It is entertaining and nail biting all wrapped up in one awesome viewing experience, whether at home or there in person.

Entertainment has seemed to push the envelope over the centuries. Are we so much more civilized than ancient Romans because the outcome isn’t a clear live or die choice?

If today’s entertainment is much more advanced, why are not the drivers’ concerns heard? Why do we even have terms like, “the big one”?

Thirty three year old Dan Wheldon knew what it took to be a winner.  He made it look that easy. He voiced his opinion on the conditions of the race; he knew the risks. Yet, still he did what any winner does – he raced – most likely thinking he would definitely be going home that evening.

This is what I will remember the next time I watch a race. These men and women are there trying to champion every second of their day, their cars and their lives. They live and breathe what they do because something burns deep down inside, and they live to conquer that fire. These racers are not just here for our entertainment; they are to be admired for searching every day for what most of us cannot find – the power to accomplish a goal no matter how long it takes. That is something to be admired and protected. There is such a thing as too many regulations, there is such a thing as letting the people in the fight voice their opinion. I would like to see the latter happen a few more times than the former in the hopes of preventing the loss of another champion.

Jimmy Jones is that guy – the one that knows what you’re doing with your car before you do. Car enthusiast and author Jimmy  is a family guy more than anything these days, spending his free time with wife Oana and new baby daughter Anabella. The family travels the world over in their spare time and he enjoys biking, running and kayaking. Oh and trying out anything with wheels.